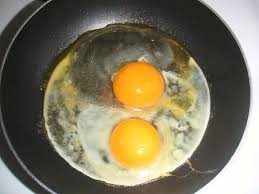 This is your brain...

This is your brain while
watching Tarkovsky

You see! It's the same damn brain!

That being said, you are really going to have to use different parts of your brain than you may be use to to appreciate Tarkovsky.

Tarkovsky's Stalker was based on the novel Roadside Picnic by Arkady and Boris Strugatsky and was released in 1979.

The plot summary involves life in a futuristic society with a mysterious forbidden zone (left by now departed aliens) where wishes come true at an end place in the zone just called "The Room." The zone can only be accessed through a guide called a stalker who leads clients through the hazards of the zone to reach their destination. The bulk of this two and a half hour film has a stalker leading a teacher and a writer in the hopes of eventually reaching the room.

Of course, since this is Tarkovsky, you aren't going to see the usual tropes such as a giant three-headed dog hindering our team from reaching the room. The blockades to their destination are all in their mind and in their dreams and in cryptic puzzles presumably set up by aliens to confuse our travelers on their trek.

Some may find this arduous endeavor confusing and aggravating in its lack of resolution. I didn't find it that way at all. I got caught up in this journey of the mind enough to watch it twice in a row. It definitely is one that will gain through repeated viewings...at least it did for me. I still have to ponder a bit on the character of Monkey... 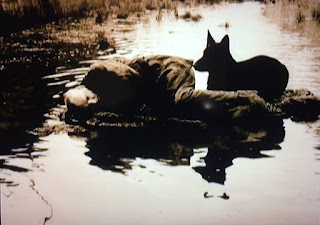 Most well known image from Tarkovsky's Stalker
I'm ordering a t-shirt with this image on it
(I'm not kidding!)

Of course, I had to follow up Stalker with another Tarkovsky movie I hadn't seen. I actually started watching Andrei Rublev (filmed in 1966, released more widely in 1969) about a year ago, but simply wasn't in the mood and decided to wait for another time. It is hard to get into at first. The story is a series of seven vignettes set in 15th century Russia whose common thread is the Russian monk and painter Andrei Rublev, who is sometimes the featured character in the stories and sometimes only serves a background player. Once I got use to this style and the way the stories were presented, I really began to appreciate it this time out. I think acclimating myself to this approach may have been the problem I had in my first abortive attempt to watch the film.

Andrei Rublev gives us images of war and truly gut wrenching horror (especially in sequence V. The Raid), but we also see redemption and hope, especially in the final sequence (The Bell). It's a difficult watch in more ways than one and plot points may get scrambled in your head, but I believe it's a difficult journey worth pursuing and one I plan to go on again.

Overall, Tarvoksy doesn't go over easy no matter how many eggs you may already have in your basket.
Posted by 1001: A Film Odyssey is produced, directed and written by Chris, a librarian. at 6:50 AM