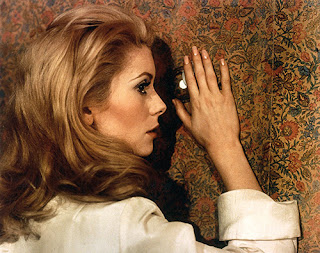 Bell De Jour
Should we look too closely at what's on the
other side of our fantasies?

The great director Luis Bunuel didn't have many movies that were popular hits. Belle De Jour was one of the exceptions and was in fact one of the biggest draws of 1967. It didn't hurt that the film was considered daring for its time and had Catherine Deneuve at her most beautiful.

The plot involves Severine (Deneuve) as a woman that has a handsome, successful husband who adores her. But something is missing in her life. She has sadomasochistic fantasies (with a decided preference for the masochistic). She takes a walk on the wild side and begins a secret life as a high class prostitute. This life is further complicated by her relationship with a rough, young criminal who excites her primitive urges. Complications ensue when she is discovered.

I like the way her fantasy scenes are depicted so casually after we see scenes of what happens in her real life. By the end of the film, we are not sure where reality ends and her fantasies begin.

So what is this woman looking for? What is missing from her life? Is she able to indulge in these fantasies only because of her position in society? A lot of questions arise here that are worth thinking about. 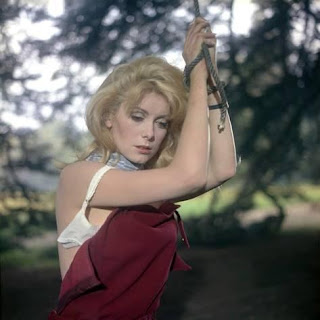 One of Severin's daydreams from Belle De Jour 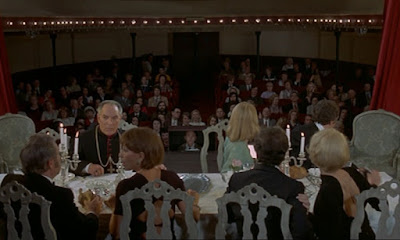 
The final Luis Bunuel film that I haven't seen from the 1001 list is  The Discreet Charm of the Bourgeoisie.

Here are some of my theories as to what the movie is really about:

1.     1.The bourgeoisie have neither charm nor are they discreet. Discuss.
2. A capitalistic society relies on the reliance and subjugation of the worker.
3. Freud’s interpretation of dreams is a mirror to the soul.
4.The military is to be lauded in public, but made up of disposable parts in reality.
5. The preparation of food and drink in the proper way is one of the bedrocks of civilized society
6, The battle between the faith inherent in religion and the natural world can be difficult to reconcile.
7. Diplomatic immunity gives you a license to do anything.
8. Terrorism is defined solely by who is writing the definition.
9. What is valued in society is completely arbitrary.
10. The world’s a stage and we are merely players.
11. The need for sex leads to the quest for power. Having power leads to a quest for sex.
12. Drugs and alcohol can help.
13. Bunuel is just messing with us.
14. It isn’t supposed to mean anything.
15. None of the above. 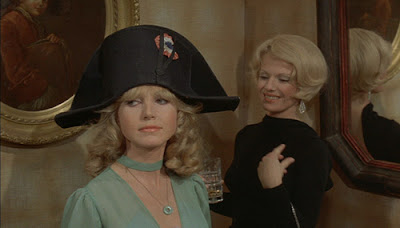 Let's play with Napoleon's hat! (Point #9)
in The Discreet Charm of the Bourgeoisie 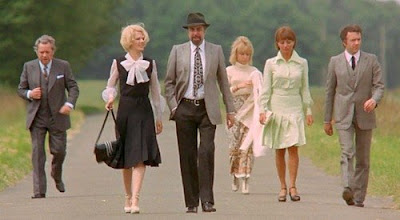 Let's take an arbitrary stroll (Point #14)
in The Discreet Charm of the Bourgeoisie
Posted by 1001: A Film Odyssey is produced, directed and written by Chris, a librarian. at 5:00 AM