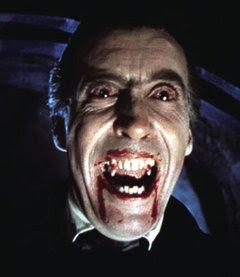 A tribute to Tom Chapin’s Make a Wish:

If you were Dracula, you could be the Universal Dracula with Hungarian Bela Lugosi or later Universal incarnations with John Carradine including House of Frankenstein with Boris Karloff who doesn’t even play Frankenstein or you could be the silent Nosferatu who was played by Max Schreck who was a real person but was supposed to be a real vampire as played by Willem Dafoe in Shadow of the Vampire or the Herzog Nosferatu remake with Klaus Kinski who often acted like a vampire in real life though his daughter Nastassia is quite beautiful or you could be the TV version with Jack Palance produced by Dan Curtis who also did Dark Shadows which had Barnabas Collins who was also a vampire, but not Dracula or you could be the Dracula with Frank Langella who the ladies seemed to like in the day and men dismissed though he did later play Richard Nixon or you could be the funny Dracula with George Hamilton in Love at First Bite whose deep tan didn’t really seem to lend itself to being a vampire or you could be Leslie Neilson in Dead and Loving It who was really funnier than George Hamilton or you could be the obscure Old Dracula as played by David Niven where I can still remember them taking the letters off the marquee one week after I saw it and realized it wasn’t a hit or you could be the Coppola/ Oldman version which I would comment on but I frankly remember little about it or you could be Andy Warhol's Dracula whose limb severing scene reminded me of Monty Python and the Holy Grail or you could be the 1971 film Dracula vs. Frankenstein which might be the worst movie ever made or be Billy the Kid vs. Dracula directed by the infamous “One Shot” Beaudine which was almost as bad or be the BBC version I saw in high school as I was reading the book which was a broken copy held together with a rubber band that Mrs. Moffett lent to me and the BBC version was edited and I was outraged at the time but now I understand the need to edit or you could be one of the many vampire knockoffs which I won’t get into now or…you could be one of the Hammer films.

The Hammer Film Studio's The Horror of Dracula begins with Jonathan Harker arriving at Dracula’s castle and declaring “My name is Jonathan Harker I'm the new librarian.” He later talks to the Count about going through his books and Dracula says what an honor it is for Harker to go through his collection and oh, who are they kidding? They're both just pretending! This movie isn’t going to be about librarainship. They were just teasing me. It’s about vampires!

Harker and later Van Helsing are out to end Dracula’s reign of terror. That’s the gist. Christopher Lee (who led a gay motrocylce gang in the 1980 film Serial has almost no dialogue after the first few minutes of the film. Peter Cushing (who played Winston Smith in a TV adaptation of 1984, in the 50’s), on the other hand, has plenty of dialogue. In fact, one of the more interesting scenes is when he talks about vampires into a recorder. But this stuff is basic Vampire 101. “They can only come out at night, they are repeled by a cross, use plenty of garlic etc.” You would think a man whose life's work is vampires would know all this already, but he’s reciting it like he’s trying to memorize it for a mid-term.

I really like the sequence where Van Helsing leaps to the window to tear down the shade to expose Dracula to the light. Don't ask me why, it reminded me of Peter Pan maybe?

Lee is a scary, hissing Dracula machine. The special effects of Dracula’s final deterioration are also pretty good. (Don’t worry, he’ll be back for more sequels)

Overall, a solid 82 minute piece of entertainment and frankly preferable to the Lugosi/Browning version, though I plan give that another view.
Posted by 1001: A Film Odyssey is produced, directed and written by Chris, a librarian. at 7:23 PM