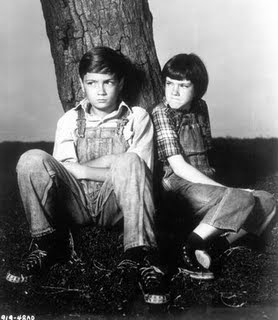 Phillip Seymour-Hoffman’s Capote said something to the effect of “I don’t see what the big fuss is about” when he talked about the hoopla surrounding his friend Harper Lee’s book To Kill a Mockingbird. There has always seemed to be a bit of a disconnect between the critical opinion of this book and the people's more positive acceptance. The Modern Library’s rather academic top 100 novels of the century avoided To Kill a Mockingbird altogether. A similar 20th century list from librarians put To Kill a Mockingbird squarely at #1.
Well since I’m a librarian, it’s lucky I fall on the side of the latter list. So take that Dill! Go hang out at Studio 54 and The Merv Griffin Show and try to lighten up.

Screenwriter Horton Foote did a nice job of adapting To Kill a Mockingbird for the screen. Some of the details in the transfer to celluloid are lost of course, but the essence of the story of the noble Atticus Finch and his children and the defense of a black man accused of raping a white woman is still intact.

The scene where Atticus’s daughter Scout sees the reclusive and scary Boo Radley for the first time, smiles and says “Hey, Boo,” gets me every time whether in print or on film.
(Excuse me for a moment. I’m Verklempt.)…Thanks, I’m better now.

Gregory Peck was a great Atticus of course, but I also like the performers in some of the smaller roles: Brock Peters as Tom Robinson, Collin Wilcox as Mayella and of course Birmingham’s Mary Badham and Phillip Alford as Scout and Jem. (What a great way to find kids with real Southern accents! Actually cast from the South!)

I thought the music was a little heavy handed at times, but composer Elmer Bernstein said he meant to go overboard with the music to give it a childlike element. Don’t you hate when DVD extras ruin a perfectly good criticism? So, I guess I should give a guy who was nominated for 12 Oscars for musical scores the benefit of the doubt.

I did think the movie could have done without the voice-over narration. It made me think of the screenwriting guru McKee from Adaptation who bemoaned the use of narration of any type.

Can all this be mere coincidence? I think not!
Posted by 1001: A Film Odyssey is produced, directed and written by Chris, a librarian. at 6:56 PM