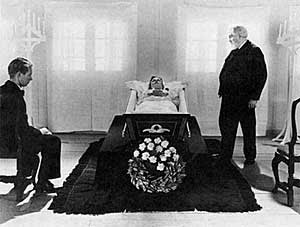 Quote #1 from the novel “Invisible” by Paul Auster.
If not for the end, Ordet would not have effected you any more than any other good film you’ve seen over the years.

It is the end that counts, for in the end does something to you that is totally unexpected. And it crashes into you with all the force of an ax felling an oak.

Will my reaction be like Adam Walker (Auster’s character) or like those in the audience who laugh at the unlikely resurrection?

You might find this film a heavy trip, so if you chose to venture through it, you may want to bring along a pint or two of Tuborg for your journey.

Let me move on to a lighter question.

Quote #2 from the novel “Invisible” by Paul Auster
Little by little, you come to understand the library is good for one thing and one thing only; indulging in sexual fantasies.

My thoughts: Well, first I’d like to say-oh no, we’ve run out of time for today’s blog. Topic to be continued at a later date.
Posted by 1001: A Film Odyssey is produced, directed and written by Chris, a librarian. at 7:56 PM