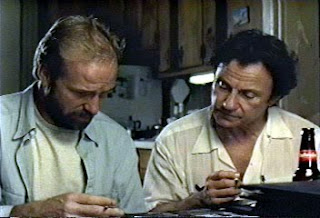 I always look forward to the next Paul Auster novel. His works include: Book of Illusions, about a professor working on a book about a silent screen comic who disappeared, Man in the Dark, about a book critic trying to cope with nightmares about the death of his wife, Invisible, the story of a poet who witnesses a murder, Oracle Night, about a novelist…well it’s a novel within a novel-a common Auster theme. Brooklyn Follies is one that doesn’t have a main character that’s a writer, but does have an important character that owns a bookstore.

Mr. Auster’s film Smoke has long scenes and a slow pace that make this kind of a “Brooklyn Yasujiro Ozu film.” (at least according to Auster and director Wayne Wang)

This must have been a hard movie to promote. Auster’s books are more about character and narrative than lending itself to easy summation or a pat ending. (I still don’t know what the ending of Man in the Dark was about.)

The promotional poster for Smoke has Ashley Judd and Stockard Channing both smoking cigars while flanking a laughing Harvey Keitel with a small picture at the bottom of William Hurt on a cigar label. Not that I have a better suggestion for a promotional poster, but the one they used ain’t it. Though according to the commentary the film did relatively well and was even more popular overseas.

The characters are typical Auster. The main character of Smoke is, of course, a writer. William Hurt plays the Auster stand-in, a novelist who has experienced the tragic loss of his family and has never gotten his life back on track. Harvey Keitel plays the cigar store owner with the quirky habit of taking a picture of the same street corner at the same time everyday. Harold Perrineau plays the at-risk but basically good kid trying to make it under difficult circumstances.

It was great to see this first rate cast on their game: Hurt as the writer trying to get the motivation to write again. Perrineau as Thomas (Rashid) Cole, a seventeen year old looking for some direction in his life as well as his father. Watchers of the show Lost might be surprised to see Perrineau as a seventeen-year-old. But he really does look young. Perhaps Stockard Channing used her Grease experience to give him tips on how to play seventeen while in your thirties. Also, this is my second Stockard Channing movie in a row. I don’t think there are any more Channing performances on the 1001 movie list. (What, The Fish That Saved Pittsburgh didn't make the cut?) Does anyone else remember Ms. Channing in the early 70’s TV movie, The Girl Most Likely to... about an unattractive and mistreated girl who has plastic surgery and takes her revenge on her abusers? But I digress. Forrest Whitaker as Rashid’s estranged father who lost his wife in an accident that was his own fault (there’s that loss theme again!) is good as he almost always is. Best of all is Keitel. I can’t recall off the top of my head many other roles Mr. Keitel has played where he wasn’t a pimp, a crooked cop, a big time gangster, a small time gangster or the apostle that betrayed Jesus Christ. My point is, it’s nice to see him in a sympathetic role. The Christmas story that he tells to William Hurt near the end of the film is terrific. Though the odd camera close-ups during that scene are a bit distracting.

Recommended viewing and pick up one of Auster’s books while you’re at it.
Posted by 1001: A Film Odyssey is produced, directed and written by Chris, a librarian. at 11:26 PM