1974 revisited
When I was 11, I practically begged my dad to take me to see Blazing Saddles. (For the record, there were three movies I remember pleading with my father to take me to around that time: The Exorcist, Blazing Saddles and The Reincarnation of Peter Proud.) Well, he took me and I loved the movie, of course. What kid that saw this in 1974 didn’t love the famous “campfire farting scene?” If you don’t know the scene I’m talking about, all I can say is: What kind of film buff are you, anyway?

I do remember my dad’s favorite part was Harvey Kormann’s constant references to his name: Hedley Lamarr.


2011
History repeats itself: I’ve been talking this movie up with my 14-year-old niece Krista for about a year now. She’s looking forward to seeing what all the fuss was about. Tonight’s the night. Wait, it’s coming on now…

We’ve finally watched it. I did have to explain to her who Hedy Lamarr and Cecil B. Demille were and why Cleavon Little signing “I Get a Kick Out of You” is funny and I tried to point out as many intentional anachronisms as I could, but she seemed to get most of it and even declared it ” hilarious.” Ah! A new generation that can appreciate a good campfire farting scene. Glad to do my part for the youth of America.

1. Airport 1975
1974 will always be to me the year of the disaster movie. The stewardess is flying the plane! If you are wondering who uttered this line, it was Sid Caesar. If you aren’t wondering, it was still Sid Caesar.

2. Big Bad Mama
I believe this is the one with Angie Dickinson equipped with big hair and an outrageous Southern accent and William Shatner being hammy (as hard as that is believe!) Not to be confused with Bloody Mama, that was Shelley Winters.

3. Dark StarPre-Halloween John Carpenter. I just wish I remembered more about it. Will put on my rewatch list.

6. Earthquake
The second leg in the 1974 disaster trilogy. This one’s main appeal was the gimmick of Sensurround, which I experienced in two theaters. It seemed to consist of a lot of noise and not enough much shaking either time. But any movie with former child evangelist Marjoe Gortner as a gay psycho has at least got that going for it!

10. Herbie Rides Again
I remember little about this one except that the original is better. Dean Jones, where art thou?

11. The Island at the Top of the World
I think I thought this movie was cool at the time. I was probably mistaken.

12. Lenny
Oh, 1001 movie book. How can you leave out Lenny? It may be brutal, but it's memorable
.
13. The Longest Yard
Oft quoted if you grew up in the 70’s. Probably Burt Reynolds’ best movie that doesn’t have the word deliverance in the title.

14. The Lords of Flatbush
Should have made Perry King a star; Made Sylvester Stallone a star instead.

15. Macon County Line
Mostly remember going to see this with my brother when he worked at a newspaper. Can you say free passes, baby! (Or was that Return to Macon County?)

16. The Man with the Golden Gun
A pretty fun James Bond flick. Though Connery purists may scoff, I’m cool with Roger Moore as J. B.

17. Murder on the Orient Express
You don’t really see these type of celebrity filled whodunits anymore.

18. The Towering Inferno
The third leg of the 1974 disaster trilogy and my favorite of the three. You know, Faye Dunaway and William Holden were in this film and Network. It’s only taken my thirty-five years to make that connection.

19. The Trial of Billy Jack I’m a Billy Jack fan, but this was one too many.

20. Zardoz People seem to have mixed feelings about this Sean Connery sci-fi flick. Though there’s seems to be no debate about Sean’s questionable wardrobe. (Below) 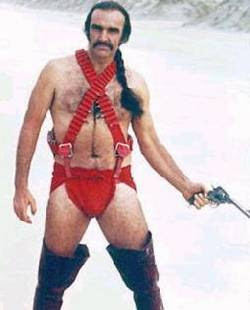 1974 revisited one more time
While I was stuck in 1974, I’ve decided to see one more film from that year.

I wanted to watch something completely the opposite of Blazing Saddles. I chose the John Cassavetes’ film A Woman Under the Influence. The only thing I remember about this when it came out was that it was nominated for a lot of awards and critics loved it and that I didn’t really want to see it at the time. (I was 11! I wanted to see Blazing Saddles and The Towering Inferno!)

I’ve seen it now and it was indeed a contrast, if not the polar opposite of Blazing Saddles. I had always thought it was about a woman who was an alcoholic. It isn’t, though she can drink up a storm when she wants to. I think Cassavetes’s films are interesting overall. If you aren’t use to his more naturalistic filmmaking style the results can be quite jarring. The scene that struck me the most was where the husband (Peter Falk) and a few of his co-workers are having dinner prepared by Falk’s wife (Gena Rowlands). I kept expecting some exposition in this scene and then the movie would move on. It didn’t. It stayed with the meal. And it stayed with the meal (spaghetti, by the way). Every cut just lead to something else happening at another part of the table. A co-worker began to sing. A co-worker spilled his food all over himself. Then we see Rowlands begin to talk to some of them and flirt a little bit (I think it was flirting). Finally after about a twenty-minute scene Faulk yells at Rowlands to “Sit your ass down.” The scene struck me as strange, but I it stays with you and I admit was effective.

Gena Rowlands got many accolades for her performance, including an Academy Award nomination. Peter Falk (who died recently as of this writing) is almost as good in a very dramatic role. If you just know him from Columbo or The In-Laws, you might want to check this out.

One thing Blazing Saddles and A Woman Under the Influence do have in common is that the leading character sings a version of “I Get a Kick Out of You.” Now there’s a question you’re unlikely to see on Jeopardy!

Well it’s time for me to stop playing with my pet rock and my Duncan yo-yo.
I’ve enjoyed by trip back to 1974. I’m sure I’ll return. 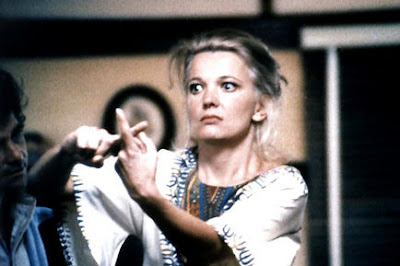 Posted by 1001: A Film Odyssey is produced, directed and written by Chris, a librarian. at 7:29 AM