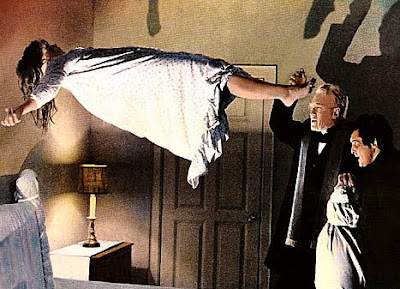 The third candidate: The Exorcist.

What was the buzz on The Exorcist?: This was the movie everyone was talking about in 1973. The devil possesses the body of a twelve-year-old girl and two priests try to cast the demon out.

Being under thirteen, I begged my father to take me to see it. He thought I might regret it, but took me anyway. It’s certainly a movie experience I’ll never forget, though I had a lot of trouble sleeping with much comfort the next week.

The Music: Who can forget that scary tubular bell theme? Why it’s ringing in my head as we speak!

MAD magazine reference (the true arbiter of seventies movies value): In the name of research, I went back and read my copy of “The Ecchorcist” from my September 1974 MAD magazine. It ends with the devil agreeing to leave the body of the girl if he signs a six-picture deal. Speaking of that…

Sequel to avoid: The Exorcist II: The Heretic Upon release this highly anticipated sequel was immediately labeled a disaster of epic proportions and has been on much worst film of all-time lists. I’ve honestly never seen it, and I don’t see that changing anytime soon.

But should it have won Best Picture? I’ll be honest. I was pretty much ready to call American Graffiti the Best Picture of 1973. But upon further review, I think the The Exorcist should really get some consideration.

Part of the problem in thinking about this film for me is my initial reaction to it which was that it scared the crap out of me! Forget the quality of the movie; I’m too busy hiding under by bedcovers to care! Then there were bad sequels and cheap knockoffs. Movies about possession or something similar became commonplace. There were also the parodies. I remember the memorable Saturday Night Live skit with Richard Pryor as the Priest and Larraine Newman as the possessed girl.

But looking back at the original, I can think of few movies that built suspense as well as this one. I’m not sure this would even be able to be made this way today, because some might find it gets to the more gory scenes at too slow of a pace. I would disagree. I know where the plot is going and it’s the progression of said plot that builds the story to its suspenseful conclusion.
I also really loved the character of Father Karras and his struggles with faith and life. And let’s just say I found his final moment in the film very moving.

It also strikes me as coming down clearly on the side of faith over science. The priests seem to know everything and medical science doesn't seem to know squat.

So, the final nominees for best picture of 1973 are The Sting, American Graffiti and The Exorcist

And my winner is…I’ll be damned, it’s The Exorcist!

1973 MOVIE SUPPLEMENT
Since 1973 was such an important movie-watching year for me, here is a list of some of the movies I’ve seen released from that year that didn’t make the 1001 Movies You Must See Before You Die cut.

Battle for the Planet of the Apes
The fifth and final leg of the original Planet of the Apes brings back memories of diminutive singer Paul Williams singing a romantic ballad on The Tonight Show decked out in full ape makeup.

Cinderella Liberty
It’s been so long that I’ve seen this that all I can remember about it is that Marsha Mason had long hair.

The Devil in Miss Jones
Half of the most infamous pair of films of the 70’s, Deep Throat being the other.

Godspell
May seem a little dated today, but I still think the last supper with Dixie cups is kinda groovy.

The Last Detail
Attention 1001 movie editors: This Hal Ashby comedy with Jack Nicholson as a foul-mouthed sailor on leave might be a good addition to the next edition.

Magnum Force
Harry’s back and he’s dirtier than ever. C’mon, if you’re a movie fan, you gotta see Magnum Force. The subsequent Harrys after you have my permission to skip.

My Name is Nobody
One of those spaghetti westerns that was "sort of" directed by Sergio Leone.

O Lucky Man!
When I think of this movie, I think of my friend who took a date to this movie only to have her begin punching him after he left the theater. I guess she wasn’t looking for something different.

The Paper Chase
Though some may have more vivid memories of the series, I still really like the original movie.

Paper Moon
Another film I’m surprised isn’t in the 1001 movie book. But, like many, I haven’t seen in awhile and may not hold up as well as I think it might.

Robin Hood
My son liked this Disney cartoon version of the legend and I’ve had to watch it more than once.

Save the Tiger
All right. This one I haven’t actually seen. I just know that at the time Jack Lemmon won an Oscar for this over Al Pacion in Serpico, Jack Nicholson in The Last Detail, Robert Redford in The Stingand Marlon Brando in Last Tango in Paris. I remember saying at the time, “What the hell is Save the Tiger?” Now all these years later, I still ask, “WHAT THE HELL IS SAVE THE TIGER?”

Scarecrow
Probably the prototype of a low-budget, early seventies, indie-type, character study picture with big stars in humble roles (Gene Hackman and Al Pacino in this case). I’ve seen this again recently and it wasn’t bad, but honestly didn’t blow my away.

Sisters Hey, this movie had me at Margot Kidder as Siamese Twins!

A Touch of Class
Glenda Jackson won the Oscar for this, but like Save the Tiger, has anybody actually seen it?

Walking TallFor lack of a more acceptable term, I called this 70’s movie genre…redneck movies. Maybe they were a counterweight to blaxpotation movies of the same era. Burt Reynolds was in most of them, but a few of them, like Dixie Dynamite, Sixpack Annie and High-Ballin’ were Reynoldsless.

The World's Greatest Athlete One of those 70’s Disney comedies. A sports franchise is trying to recruit a Tarzan-like native to be on their sports team from what I remember without looking up a plot synopsis. The comedy highlight that I recall was someone dumping a can of trash over Howard Cosell.