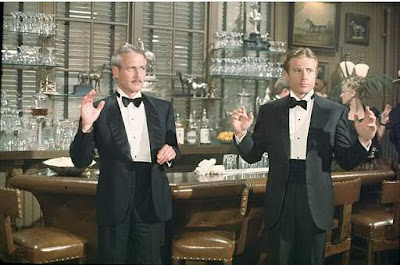 The first candidate: The Sting

What was the buzz on The Sting?: When it was released, The Sting had a lot going for it. It had the sure-fire team of Paul Newman and Robert Redford playing con men, as well as the presence of their Butch Cassidy director George Roy Hill. It had a clever con story about Newman, Redford and associates pulling a major league con on big-time racketeer Robert Shaw. (I like the names in the movie too; Newman as Henry Gondorff, Redford as Johnny Hooker and Shaw’s character, Doyle Lonnigan) The setup to the con is fun to watch: I suppose my favorite scene is watching Paul Newman cheat Robert Shaw in a poker game or perhaps the one where phony bets are being placed on a non-existent horse race strictly to lure Shaw in. The supporting cast is notable too: Eileen Brennan, Ray Walston, Harold Gould and good ole Charles Durning.

The Music: But for my money, when I think of The Sting, I think of the music of Scott Joplin. The ragtime music featuring The Entertainer wasn’t even written in the era of the movie is based (1936), but it really fits it perfectly. I can’t imagine the movie without it. And I still have the original soundtrack record album on glorious vinyl!

MAD magazine reference (the true arbiter of seventies movies value): I believe the MAD magazine version was called “The Zing,” though I might be wrong. I do remember it changed the famous Newman/Redford promotional image to the image of two even bigger crooks: Richard Nixon and Spiro Agnew! Yes, MAD never missed an opportunity for a good Nixon joke.

Sequel to avoid: The Sting 2. They couldn’t get Newman or Redford for any Sting sequel so instead they got…Jackie Gleason and Mac Davis? Huh?

But should it have won Best Picture? A solid, fun movie. I can see why the Academy gave it seven awards (though interestingly no acting awards). Perhaps the other two movies on my list will prove to be dated and I’ll have to stick with The Sting. I could do worse.

Posted by 1001: A Film Odyssey is produced, directed and written by Chris, a librarian. at 9:27 AM