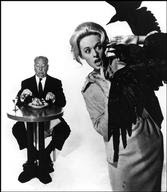 If anyone is talking about watching a Tippi Hedren double feature, they are more than likely talking about the two Alfred Hitchcock films in which she starred, The Birds and Marnie. (I guess you could be talking about The Harrad Experiment or Countess From Hong Kong, but that doesn’t seem very likely.)

When I was a kid, I first knew about Alfred Hitchcock as the narrator of his weekly anthology series. Because of this series, he was the one director that even an eight-year-old kid could name. I thought he was primarily a horror director because I knew about Pscyho and the famous shower scene even before I was old enough to watch it. The other film I knew him for was The Birds. I believe this was the first Hitchcock movie I saw. I’m pretty sure I saw it on the late, late show. All you really need to know about the plot going in is that involves bird attacks on a small resort community outside of San Francisco.

Seeing it now, I still have a great affection for it. Some may scoff at the special effects today, but let’s see anyone else do what Hitchcock did with bird attacks without the benefit of modern day computer enhancement techniques. (You might end up with something like the infamous Night of the Lepus, which featured the terrorizing attack of killer bunny rabbits!)

One thing I like about the script by Evan “Ed McBain” Hunter is the slow build to the bird attacks. We get hints here and there of what is going on until escalated bird attacks begin to dominate the second half of the movie. I especially liked the scene at the café featuring octogenarian ornithologist Ethel Griffies where there is a heated debate over the reasoning behind the bird attacks.

There's also enough here for the audience to care about what happens to the characters. They feature the serious minded lawyer played by Rod Taylor, his possessive mother played by Jessica Tandy, the baby sister, played by Veronica Cartwright and the lovelorn school teacher played by a Suzanne Pleshette. All are all pretty good here.

But the lead role is undoubtedly the character of Melanie Daniels, played by former model Tippi Hedren. Hitchcock certainly cast beautiful blondes in his movies, but Eva Marie Saint in North by Northwest, Kim Novak in Vertigo or Grace Kelly in Rear Window, are all films that focus largely on the point of view of the male lead. In The Birds, Tippi is definitely playing the main character. And she is more than adequate in the role and she gets pecked at by hundreds of birds quite nicely.

I also have the famous picture from Life magazine hanging in a frame on my office wall of Tippi Hedren being attacked by birds with Alfred Hitchcock enjoying a nice turkey dinner in the background. Well, doesn’t everyone have a picture of Tippi Hedren hanging somewhere in their home?

Though she never became a Grace Kelly or even an Eva Marie Saint-type star, Hitchcock obviously liked her enough to cast her in his next film, Marnie. I’ve never got around to watching Marnie before, mostly because its reputation was never that great. But it clearly is well thought enough by someone to make the 1001 Movies You Must See Before You Die book, so I guess it’s time for me to enter Marnieland.

I found Marnie, the movie, a tough nut to crack initially, just like Marnie the character, is a tough nut to crack in the context of the movie. I actually liked Tippi quite a bit here. She has some very tough emotional scenes and pulls them off pretty well. I had more problems with Sean Connery’s character of Mark, the rich industrialist who discovers that Marnie is a thief yet falls in love with her despite the fact that she is so distant from him. According to original screenwriter Evan Hunter, the original book still has the Mark character, but also has a seperate character that is a psychiatrist who begins to unpeel the layers of Marnie’s psyche. In the movie, Mark the romantic interest and the psychologist (at least of the amateur variety) are the same person. It just seems too much coming from one character, even from the guy who played James Bond.

Eventually, I did become more emotionally involved in the plot and liked the way they handled some of the characters revelations at the end of the movie.

Well, I think I have about ten or so more Hitchcock movies to go on the 1001 list, but I’m afraid my time with Miss ‘Tippi’ is done. It took me thirty years, but I’m glad that I was finally able to complete the second half of the Tippi double feature. 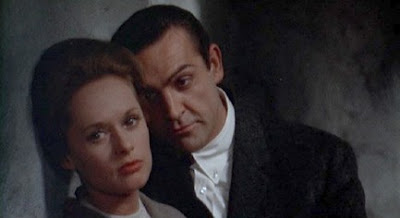 Posted by 1001: A Film Odyssey is produced, directed and written by Chris, a librarian. at 9:57 AM