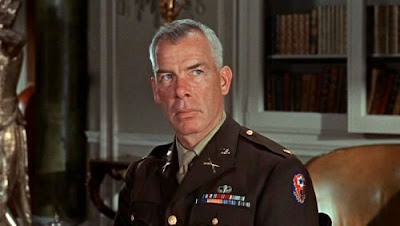 (The Dirty Dozen, 1967)
(Surprisingly not a 1001 film entry)
Robert Aldrich’s The Dirty Dozen is the now famous story of a an American colonel during the Second World War who has the impossible task of taking a group of twelve criminals on a suicide (or close to it) mission behind German lines right before D-Day.

The dozen include:
Charles Bronson: One of the ultimate tough guys. Bronson also was the only actor who had the triple crown of being one of The Dirty Dozen, one of The Magnificent Seven and one of the POW’s of The Great Escape.

Jim Brown: Maybe the greatest running back of all-time. Tough guy? You bet! I think he does pretty well for his first screen role. When he’s tossing grenades on innocent German women-I believe his glee!

Donald Sutherland: The comedy relief. His scene posing as a general is the funniest in the movie. And he does represent anti-establishment rebel roles in later films such as MASH.

Clint Walker: The western star plays the most gentle natured of the dozen. Of course, he’s the size of a house. And don’t shove him or he’ll get really angry!

Telly Savalas: Tough guy-sure. It’s Kojack, after all. I wasn’t that found of his holier than thou, bible thumping, redneck character, however. But like I said-a tough guy.

Trini Lopez: Trini Lopez? The guy who strummed a guitar and sang “The Lovely Lemon Tree” with these tough guys? Takes all types I guess.

If you have a chance to get the DVD, I highly recommend listening to the commentary by film advisor Captain Dale Dye, who says he is a fan of The Dirty Dozen as entertainment. He then proceeds to rip the film a new one as he calls into question the accuracy of just about everything. “The American army would never hang anyone in that situation.” “What is that vehicle? Looks more like the Popemobile. “Nothing like that existed in Germany at that time.” “A ticking time bomb like the Savalas character would never be sent on a mission like this for fear of compromising the whole thing.” “They would never have wasted their limited time building barracks from scratch.” “There is no record on the American every sending convicted criminals into combat like this,” etc. etc.

But on today’s blog it’s is all about appreciating Lee Marvin. Only Lee, as Colonel Reisman, (John Wayne turned the part down so he could do The Green Berets!) could give credibility to the role of the man who has to put these misfits together, train them and lead them on their mission behind German lines. Only Lee could turn his back on John Cassavetes and flip him to the ground when he is attacked. Only Lee could give the gargantuan Clint Walker a knife and push him and dare him to cut him. Only Lee could tell Trini Lopez to knock off the guitar playing…Wait, I’ll take that one back-anybody could do that.

“I don’t want to appear unduly cautious, but if my survival is going to be based on the performance of twelve deadheads, it might be helpful to know exactly what I’m training them for.”

(whispering) “Look you little bastard, either you march or I’ll beat your brains out.”

“Killing generals could get to be a habit with me.”*

Why Nine Days when you are calling it Lee Marvin week?

Because I got one more to go! That’s why!
Posted by 1001: A Film Odyssey is produced, directed and written by Chris, a librarian. at 4:19 PM