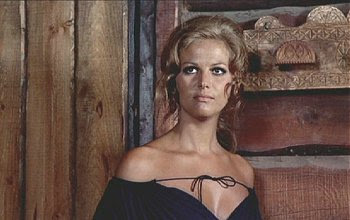 Film #3 of Claudia Cardinale week: Once Upon a Time in the West

I believe I would put Sergio Leone’s Once Upon a Time in the West at the top of my list of favorite Westerns. I might even put it in my top ten favorites of any kind of film.

The opening scene with the three gunfighters waiting for someone to arrive by train is splendid. We wait with the gunfighters who are quite bored. They nod off, try to catch flies, notice the drip coming out of the station until the stranger arrives and a gunfight ensues which is over as quickly as Charles Bronson can say, "Looks like you brought two too many."

Then comes the next scene.

SPOILER IF YOU HAVEN’T SEEN IT EVEN THOUGH ITS ONLY SCENE TWO!
It’s horrifying. We see the McBain family at their home in the middle of what seems like nowhere preparing a celebration of some kind. We learn that Mr. McBain is about to go pick up his new wife at the train station. Then as McBain is going to the well we hear a shot in the distance and we see McBain’s daughter fall over. McBain calls her name and runs to her. The oldest boy is shot. Then we see a group of men ambling toward the house at the moment the youngest McBain boy comes out and stares at them incredulously. The camera pans around this dastardly group of ruffians until we see their leader who perpetrated this dastardly act…and when we see who it is, Leone wants the audience to say, “JESUS CHRIST! IT’S HENRY FONDA.” (which you do if you haven’t seen it before). One of Fonda’s men says, “What should we do with this one, Frank?” Fonda looks at him, spits and turns to the boy and says, “Well, since you called me by name…” Then he fires in the direction of the boy as we cut to the next scene. As I said it’s horrifying and one of the best scenes I’ve ever seen.

I love the music in this film by Ennio Morricone even more than his music for the Eastwood/Leone Dollars trilogy. The sound effects replacing the music in the opening scene is fine too. The performances by the leads are all fist-rate. Charles Bronson as Harmonica, Jason Robards as the wily outlaw Cheyenne and Henry Fonda as the dastardly Frank. But this is Sergio Leone’s film. He has really painted quite an American portrait (on his Italian canvas). Not everyone likes this film They find it too slow. But those of us that do like it tend to like it a lot.

Claudia Cardinale in Once Upon a Time in the West

Claudia’s entrance: Claudia, of course, is the new wife (Jill). She arrives at the station right after the family massacre scene about thirty minutes into the film. She alights from the train. She looks demure and unsure of herself. We know what has happened, but she doesn’t. Even though she looks lost and vulnerable as she stands outside the train, the mere sight of Claudia is quite a relief for the audience after the previous scene.

Films acknowledgement of Claudia’s place in the universe
You know Jill, you remind me of my mother. She was the biggest whore in Alameda and the finest woman that ever lived. Whoever my father was, for an hour or a month-he must have been a happy man -Jason Robards as Cheyenne

If I was you I’d go down there and give those boys a drink…Can’t imagine how happy it makes a man to see a woman like you…Just to look at her…And if one of them should, uh, pat your behind…just make believe it’s nothing. They earned it.-Jason Robards as Cheyenne

DVD extra’s acknowledgement of Claudia’s place in the universe: Director John Carpenter acknowledges the long line of men that fell in love with Claudia Cardinale after seeing Once Upon a Time in the West. All I can say is, “Line form behind me, Johnny!”

Claudia on a 1-10 scale for Once Upon a Time in the West: As McBain describes her, she’s “be wearing the black dress and the straw hat she wore when they met.” (I think at the New Orleans whorehouse where she was employed) in her opening scene. And she looks great in it (the clothes, not the whorehouse). She’s definitely a breath of fresh air after the unpleasantness of the previous scene. There’s also a scene where’s she’s taking a bubble bath…er, voting’s over…Claudia’s a 10!

Next up: Fitzcarroldo
Posted by 1001: A Film Odyssey is produced, directed and written by Chris, a librarian. at 11:58 AM