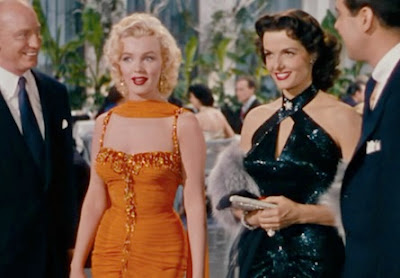 Marilyn Monroe’s other entries on the 1001 list (Her small but memorable role in The Asphalt Jungle and the classic Some Like it Hot) are both films I like more than this one . But Gentlemen Prefer Blondes is probably the film that shows Marilyn (as Lorelei Lee) at her most Monroeviest. I'm talking about the ditz who is a bit of a golddigger, but still comes equipped with a healthy supply of gold already in her heart. And we also get to see her perform “Diamonds Are a Girls Best Friend,” probably her most famous screen moment. My favorite line in the movie comes from veteran character actor Charles Coburn, who replies to Lorelei’s line that she was expecting someone older when she meets him with, “Older than what?”

P. S. Jane Russell isn’t exactly chopped liver either, and does a pretty good Marilyn impersonation during the courtroom scene.
Posted by 1001: A Film Odyssey is produced, directed and written by Chris, a librarian. at 2:47 PM