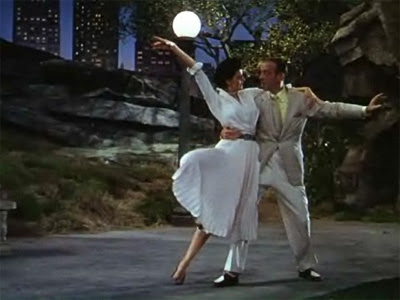 So that's where the song That's Entertainment came from first! Or did I already know that?

The thing about watching a lot of muscials in a row is that you get to the point where you say to yourself, why did I choose to watch so many musicals in a row? So I went into watching The Band Wagon with probably not the best of attitudes. All I knew about it was that rather over-the-top triplets number where Fred Astaire, Nanette Fabray and the other guy do that rather annoying song dressed as babies.

But as I watched, I began to like the whole musical within a musical storyline. The numbers seem pretty inspired to my untrained eye and Astaire and Cyd Charrise make a pretty good team. And the other guy (Brit Jack Buchanan) is pretty good, too.
Posted by 1001: A Film Odyssey is produced, directed and written by Chris, a librarian. at 2:35 PM