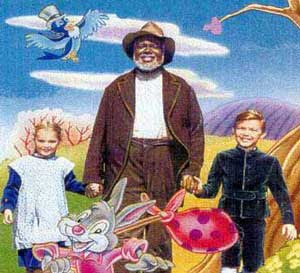 I saw this movie in re-relaease at the Fox Theater in Atlanta in the early 70’s. I thought it was wonderful at the time. The main character was this whiny kid, so it was definitely someone I could relate to! The best part of the film is of course, the imaginative stories of Uncle Remus about Brer Rabbit and Brer Fox (whose voice sounds just like Eddie Murphy to me). It was quite a wonder to see the cartoon characters and live action actors interact.

Seeing it today, the story is a bit thin. Eh, so what? The wonder is still there for me, because the Uncle Remus stories are still imaginative and fun. Too bad the film isn’t in wider distribution.
Posted by 1001: A Film Odyssey is produced, directed and written by Chris, a librarian. at 2:49 PM