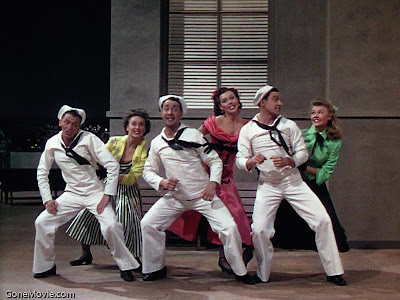 Twice as gay as Anchors Aweigh! –trailer promo for On the Town.

I didn’t have any expectations for the musical On the Town and I must say I was delightfully surprised. First of all, as with most of the muscials from this era you’ve got to have a great suspension of disbelief to accept the plot of three sailors on leave and how they meet and pick up/fall in love/but certainly don’t sleep (well, maybe in subtext) with the three girls they find in the big city.

The musical numbers are memorable (New York, New York It’s a Helluva Town and You Can Count on Me ). The film is fast paced, fun and the dialogue is pretty sharp. And the cast features the two biggest musical stars of the era (Gene Kelly and Frank Sinatra,) the comedy relief (Jules Munshin , Betty Garrett),the lovely Vera-Ellen and perennial tap dancing hottie Ann Miller.

Note: I admit that liking this movie has made me feel a little old. Perhaps I should follow it up with a different view of New York. Taxi Driver maybe? Well, maybe for another month.
Posted by 1001: A Film Odyssey is produced, directed and written by Chris, a librarian. at 2:42 PM