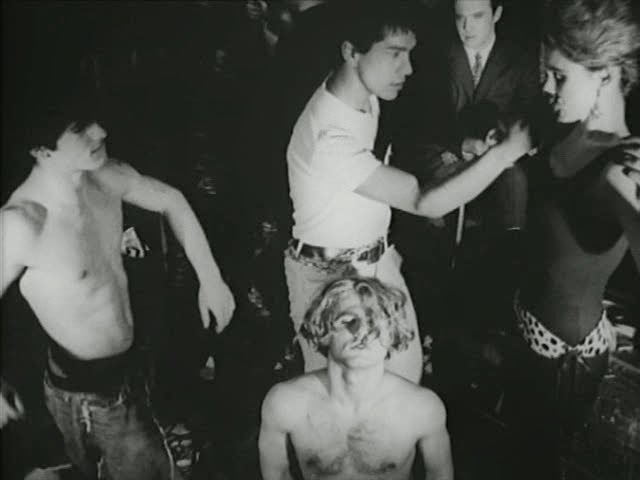 1. What happens?
Blonde male in leather lifts some weights to the indifference of those behind him. This blonde guy appears to hold contempt for newspapers and ties up a guy to a pole and tortures him. He says he does bad things because he "digs it." He dances to Martha and the Vandellas. He gets into an altercation with someone he refers to as "scum baby." At this point, he is suddenly on the wrong end of an interrogation. He is strapped to a chair as a doctor examines him and someones reads the cast credits even though the movie isn't over. He is subjected to images that change his way of thinking. He is forced to wear a mask. He is released from his bondage and listens to some Kinks and some Stones and dances.

2. Was it heavy? Did it achieve total heaviosity?
I dug it enough to say it was a little heavy, but I've certainly had heavier.

3. What was your favorite part?
When I recognized the parts that were recognizable as being from Clockwork Orange, I kind of dug that.

4. What was your least favorite part?
I think this story could have been told in half the time. I didn't dig the moments of nothing happening.

5. Did you get it?
It's a bare bones adaptation of the Anthony Burgess novel A Clockwork Orange before Kubrick made an actual movie out of it. I can dig it.

6. Might the viewing experience have been enhanced from either prescription or non-prescription medication of some kind?
Too much of a high may cause the plot of Vinyl to slow down to an intolerable pace. I couldn't dig that.

7. What about the sex?
I can't say I dug the bumping and grinding sex, though it was more figurative than anything.

8. What about the violence?
I don't dig violence, and tying someone up and putting a mask on them? I really can't dig that.

9. Describe this film in one sentence starting with "This is the film..."
This is the film that Andy Warhol made loosely following the plot of Clockwork Orange, and you're probably not going to dig it.