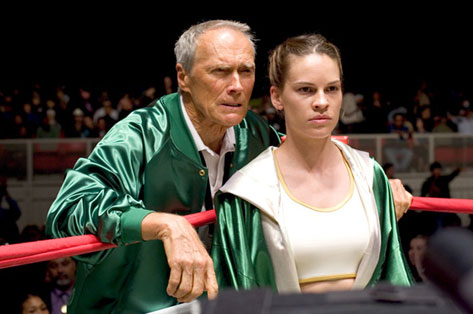 Anyone interested in a close look at Clint Eastwood's long career as a movie star might want to read Marc Elliot's American Rebel: The Life of Clint Eastwood. From the Leone films of the mid 60's to Grand Torino over forty years later, how many other stars can really compete with Clint's longevity?

It's hard for me not to first think of Clint as the Man With No Name or Dirty Harry, but it's his career as a director (Over 30 films, two Best Director Oscars) that really makes me take note. Elliot sees him as a flesh and blood auteur, with a recognizable signature on most of his films (Though maybe not for Breezy).

Clint won his second directoral Oscar for Million Dollar Baby, which I don't like as much as Unforgiven, but does have Hillary Swank as The Million Dollar Baby, Morgan Freeman as the trainer and Clint himself as the crusty old manager, training someone who he doesn't want to train because of her persistence. The strong, but at times depressing story, is one of those movies that I saw once and didn't want to watch again. But on my second viewing, I admit to liking it even more. It's really an emotional and dramtically involving movie. Come to think of it, I liked Unforgiven more the second time I saw it, too. Maybe there's something to this auteur theory after all!

Note to self: Watch Mystic River again.
Posted by 1001: A Film Odyssey is produced, directed and written by Chris, a librarian. at 7:35 AM