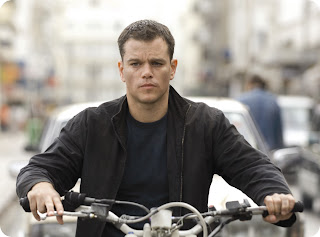 There continues to be a steady supply of new books coming into the library featuring Robert Ludlum’s super agent Jason Bourne. It’s especially telling since Robert Ludlum died in 2001. The Bourne movies that these books spawned have proven to be even more popular than the books. I must confess, I’ve never read a Bourne book or seen a Bourne movie before. The Bourne movie on one of the 1001 lists is The Bourne Ultimatum, which is the last one (I think) in the Jason Bourne series with Matt Damon. Since this was the one on the list, this is the one I chose to watch. I quickly realized after the first few minutes of the film, that I probably should have started off with The Bourne Identity because I found myself quickly caught in the middle of a story that I didn’t know where it was supposed to go or why it was headed there. About half way through, I started to catch up a little better on what was happening and thought that overall it was a pretty good action flick, as action flicks go.

Posted by 1001: A Film Odyssey is produced, directed and written by Chris, a librarian. at 6:59 AM