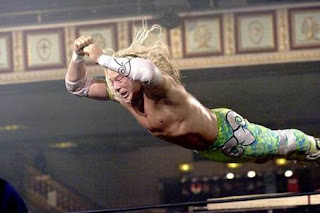 The Wrestler and Anvil! The Story of Anvil

The Wrestler and Anvil! both feature high testosterone subjects (wrestling and heavy metal music) and whose ultimate moral for me is the same. “Hang in there! Do what you believe! Never give up!”

In the case of the fictional film, The Wrestler, aging grappler Randy the Ram is still trying to eke out a living in small wrestling venues while being tossed onto tables, having his head cut open or having another wrestler use a staple gun on him! It doesn’t seem too glamorous, but what else is Randy going to do? That is what he knows and who he is. When he develops a heart condition and is told to stop wrestling, he tries to do something different. The scene with Randy the Ram, hairnet and all, trying to work at a deli counter in a grocery store is one of the most tragic yet funny scenes I can remember. Of course, he hangs in there. Doing what you believe and never giving up may cost Randy his life, but he truly doesn’t seem to have a choice.

Anvil! is a documentary about an actual Canadian heavy metal band and their attempts to make a comeback, or just make another record, really.

This film has a lot of similarites to the fictional This is Spinal Tap!-Anvil even visits Stonehenge! Their sound equipment goes up to 11! They even have a gig in Europe where the owner of the club refuses to pay them! (If I told ‘em once I told them a hundred times to put Spinal Tap first and puppet show last!) And there is even the obligatory falling out between bandmates Lipps and Robb where these best friends will never work together again! Of course, they do get back together. “I was wrong. I’m an asshole. I love you brother. I can’t do this without you!”.

Like Randy the Ram, we see Lipps trying to make money at a “real” job. His attempt is as a phone solicitor. He can’t do it. It just isn’t in him. What’s he going to do? I’m not a fan of heavy metal, but you got to admire their perseverance and root for them to get their record made... Or at the very least have a fan like Sacha Gervasi who might one day become a documentary filmmaker and make a movie about you.