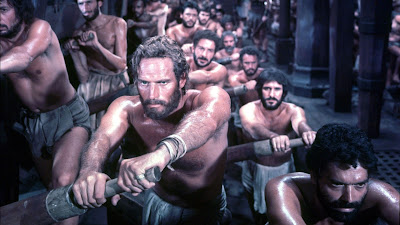 Charlton Heston rows on the slave ship in Ben-Hur

One of the trends of Fifties cinema was towards giant biblical epics such as The Robe or The Ten Commandments.

Ben-Hur, released the last year of the decade may have been the biggest of them all. The story of the riches to rags to slave to prince to hero story set during the time of Christ is definitely the definitive version of the story. I realize there is a silent version that many still love and a recent version that nobody seems to love.


I first saw William Wyler's Ben-Hur on the big screen many years ago. This is really the way to see it. It's certainly a grand story if you are in the mood for it. And the chariot race is one of many highlights. The crucifixion related scenes are also quite moving. The film won a record number of Oscars and was one of the biggest box office hits of all-time. It would definitely make my 1001 list. The thing about epics of this nature with me is that I really have to be in the right frame of mind to watch them. 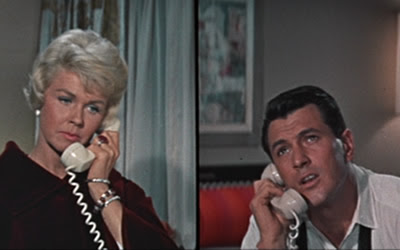 I've written several stories for this blog where a character based on myself has a secret affection for the frothy comedy Pillow Talk. It had been a long time since, I've seen it, so I decided to watch it for this blog to determine if I really did like it.

The plot involves an interior decorator Jan (Doris Day) who shares a party telephone line with womanizing stud (Brad) Rock Hudson. She hates him. He's obnoxious. He hates her. She's cramping his style. They meet. He wants to get to know her better. He may even be able to quit his womanizing ways for her. She still hates the guy on the party line, so he pretends to be what I think is Rock's Texan character from Giant. They begin to date. They fall in love. Then she finds out he really is the guy on the party line and not the nice Texas boy she fell in love with. They break up. She redesigns his apartment. He convinces her that he's really an okay guy after all. They fall in love again.

It's a cute but light comedy. It cleverly uses a lot of split screen scenes to show what both characters are thinking at the same time. Okay, I like Pillow Talk. It isn't on the 1001 list, but if you want a comedy typical of the time, it's worth a look. Plus, it does have the always fun Tony Randall and Thelma Ritter.

It's interesting...when Rock (as Brad) tries to dissuade Jan from dating Tex (Also Rock) because he's a mama's boy. Being a mama's boy is fifties talk for being a homosexual, which of course Rock Hudson was.

It's also interesting...that 1959 was about the time of the beginning of European New Wave cinema. I think it's interesting in the British film Saturday Night and Sunday Morning, a couple go to the movies and see Pillow Talk. The girl's only response to the film they just saw was "That was a bad film."Ouch!

1) Gidget-Yes, the premiere of the cute little beachnik featuring Sandra Dee and later spawned a Sally Field TV series and…who am I kidding? I’ve never actually been able to sit through a Gidget movie, though I have used the phrase “Big Kahuna” on occasion. 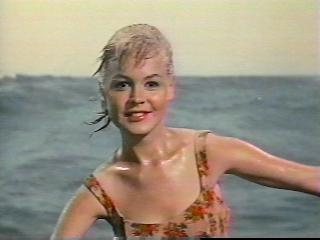 Look at me, I'm Sandra Dee as Gidget

2) Journey to the Center of the Earth-Sure it was based on a Jules Verne story and sure it later became the basis for Rick Wakeman's magnum opus...but really, future archaeologists will unearth an old VHS copy of this and ask only one question: So, why was this Pat Boone ever popular, again?

4) Solomon and Sheba-One of those sword and sandals epics that featured Yul Brynner with hair, no less! and the Ubervoluptuous Gina Lollabridgida.

5) 30 Foot Bride of Candy Rock-The only Lou Costello effort without Abbott. I remember watching this as a kid and fruitlessly WAITING for Bud Abbott to appear.

6) Compulsion-Really should be in the 1001 movie book. Based on the Meyer Levin novel (an interesting read) about the Leopold and Loeb murder case and features Orson Welles as the Clarence Darrow stand-in as well as a pre-Quantum Leap as Dean Stockwell as one of the murderers.

7) The Devil's Disciple-Burt Lancaster and Kirk Douglas were a great screen team. This was a fun movie from what I remember.

8) The Diary of Anne Frank-Read the book. See the film. See it on stage. Learn from it.

9) Say One for Me-Rather dreary Bing Crosby musical from what I remember. I haven't seen it in over thirty years, so it may be better than I remember.

10) The Shaggy Dog- Perennial Disney classic number one. The Shaggy Dog...It's been a while since I've seen it...I know someone turns into a Sheepdog...It may have been Tommy Kirk...not really sure. 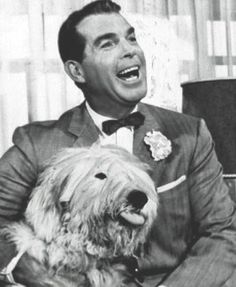 Fred MacMurray and man's best friend
in The Shaggy Dog

11) Sleeping Beauty-Perennial Disney classic number two. I especially like the part where the mice help her through her misery...oh, wait. That was Cinderella. Never mind.

12) Suddenly, Last Summer-Based on the Tennessee Williams play. Some seem to love it..Others not so much. One I need to revisit. 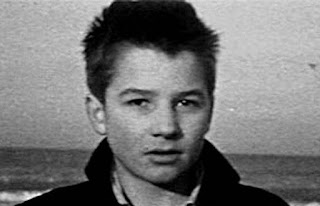 I'm not through with 1959 yet...more tomorrow.
And stop staring at me!