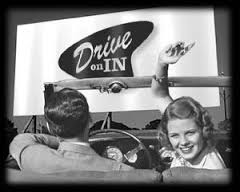 Like Carl Sagan's Spaceship of the Imagination in Cosmos, I'm taking myself back...back to 1959. Back to the drive-in. Where the picture isn't really that clear...it's too light outside...the sound isn't that good coming out of the virtual speakers...I couldn't really find a good spot to park in the first place...There's also some teenagers in the car next to me making out...It's a bit cold here too...I've spilled my popcorn...I should have at least brought a girl with me on my virtual journey...Oh, well. The movie is about to start.

Okay. Teenage Zombies. There's some teens in the malt shop (very 50's) They are trying to decide whether to go horseback riding or skiing. After much deliberation and banter, two of the teen couples decide to go off in a boat. Big mistake in a movie called Teen Zombies. They end up on an island and get out and see some people that look like migrants walking around aimlessly. This little shot is about the closest we get to actual zombies in the whole picture. I think I'll get some more popcorn....The kids are getting back to their boat only to discover their boat is gone! They've also seen a mysterious hulking creature (pictured below) walking around. They desperately look around the island and find a house with a female proprietor who seems to be dressed in sequins for some reason. I really like her 50's style kitchen even though it doesn't appear to be stocked with much food, even though she does offer sandwiches. This mysterious woman also tells the teens that they are mistaken in what they think they saw and she has no idea where their damn boat is! None of this matters, because the mysterious hulking figure comes around and captures the teens and puts them in a downstairs jail!

Meanwhile, a teen couple that didn't go on the trip is trying to find out what happened to their friends. They boy in this couple is especially exasperated as he tries to discover what has happened! This couple finds the island and meet the same woman who makes another unsuccessful attempt to give away some sandwiches before casually letting them go.

A couple of guys dressed in ties come to the island to talk to the lady. I think they talk about making an army of zombies and since it's the fifties, mention the hydrogen bomb.

The teens that got away bring the sheriff back to the island where we see the strange lady and the guys with ties beginning their experiments on the captured teens. Some of the teens break free and all the characters grapple before they all decide to leave the island. A gorilla came in to save the day and...wait a minute...a gorilla? Did I just dream that part? I did miss some of this section because I spilled some drink and had to get myself cleaned up.

The teens find the deputy back in their town. They are declared heroes and they are going to be given a medal from Eisenhower himself! They all climb into their coupe and drive off. 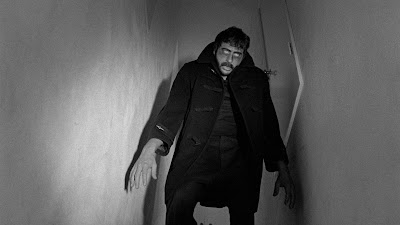 Not quite a teenager, not quite a zombie- but about as close
as Teenage Zombie gets to the concept of the title.

Well, Teenage Zombies wasn't so hot, but maybe the second bill of this double feature Alligator People will be a little better. It actually starts off pretty well. A team of psychiatrists hypnotize dishy nurse Beverly Garland and find out she has suppressed memories of her past. These memories lead her back to her honeymoon where her husband, whose miraculous recovery from a plane crash is recounted before he disappears.

Beverly searches all over for her husband, and is led to the swamps of Louisiana by her husband's college transcripts. Geaux Tigers!

She gets a ride to the address she found by the gator hating one-armed Cajun character played by Lon Chaney, Jr. He isn't taking her for a pina colata at Trader Vic's, but is taking her to a mansion with a strange matron who claims not to know her husband. Clues emerge that point to her husband as actually living there after all. The movie is actually a pretty decent mystery so far.

Beverly then hears a piano being played in the house and goes down to check it out. She glimpses a weird and moist creature who sees her and then runs away. The lady of the house finally admits that is her son. Beverly then wanders into the swamp where she is rescued by Lon, but is unwilling to give him a little nookie as his reward. Her husband (who we now know has alligator-like flesh) rescues her from the unwanted advances, but knows he can't be with his wife again unless he can change back somehow to his old self with a more palatable epidermis.

We skip to the lab with Beverly, where the scientist who first saved her husband admits that he used gators as part of his experiments to bring back the severely injured to normal health. Even though he uses diagrams and charts to show how this is done, I really didn't get the science of it. It was a nice chart, though.

The scientist has one last hope that might change the husband back, but as we can probably figure out, the transformation doesn't go well and he goes full alligator. The lab blows up after Lon comes back for revenge. The husband drowns in quicksand. Beverly eventually forgets all this ever happened as we go back to the original scene in the psychiatrists office, where the doctors decide not to tell their pretty nurse about her sad reptilian past.

I think I had too much popcorn and chocolate covered stars. I don't really want to use the bathroom here so I think I'll just go with the flow of traffic and transition back to today...It was fun to go to the old drive-in, but I really don't think I'll be coming back. 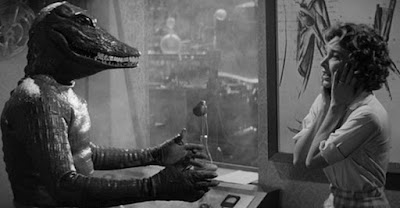 A couple of other 1959 films fit neatly into this B-movie category and have made a lasting impression on me.

Plan 9 From Outer Space also came out in 1959. Ed Wood's story of grave robbers from outer space starring Criswell, Vampira and a dying Bela Lugosi is probably the most famous bad movie of all-time. Though it is hardly the worst film of all time! Not as long as Manos, The Hands of Fate and Monster A Go-Go are still around.

The Wasp Woman is about a cosmetic supplier using the essence of wasp or something that makes the women using it turn into human wasps! I think that was the plot. I do know that despite the cheesy nature of this film, it scared me quite a bit when I saw it on the superstation way back when! 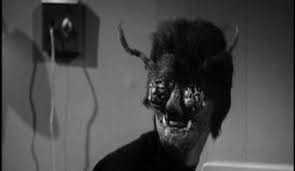 
Mystery Science Theater 3000 was (and is in its similar Internet Rifftrax transmogrification) a show whose plot involved a poor schmuck that was sent into outer space along with his two robot friends and forced by mad scientists to watch bad movies while the scientists monitor his mind. Most of the episodes are of cheesy movies and we get to watch the poor schmuck (Joel and later Mike) and the robots (Crow and Tom Servo) make sport of the films with their snarky comments. I've been a fan of this show for a long time, but the reason I bring it up here is that I think there is no better year of cheesy movies that MST3K has used than 1959. These are the only context I've seen these movies in. All these 1959 films I have seen on MST


1) The Beat Generation- Not to be confused with Beatniks starring Peter Breck, but The Beat Generation does at least have Jayne Mansfield imitator Mamie Van Doren. Or was she a Marilyn Monroe imitator? Or am I getting these movies mixed up? Well, no matter.

3) The Brain That Wouldn't Die (Disembodied head that is kept alive, noted episode for MST fans because it is the first episode where Mike replaces Joel as the host.)

4) Teenagers from Outer Space- (One of my favorite episodes. "What about torture?")

7) The Giant Gila Monster (Didn't really have the staying power of Godzilla, did it?)

9) Santa Claus (Not as famous as the Santa Claus Conquers the Martians episode, but pretty funny in its own right)

11) Girls Town (with Mamie Van Doren...and that should be enough) 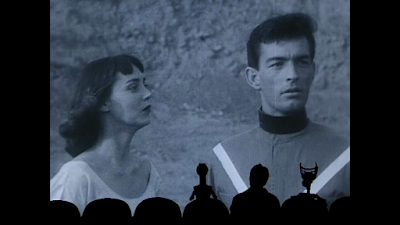 Teenagers from Outer Space by way of
Mystery Science Theater 3000


I admit that when I decided I wanted to do a movie blog, I thought about doing one on B-movies instead of the blog theme I chose because they're so fun to write about. I don't regret the theme I chose, but it might have been fun to go the other way.