Nights of Cabiria is Fedrico's Fellini's sad tale of a small village hooker (I actually hate to label her that since the movie is appropriately subtle about it) who goes through a series of bad relationships as she tries to find ways to escape her life and fall in love. That description doesn't really do the plot justice, since the films subtleties doesn't lend itself to simple plot synopsis. It may be something to see for people that think 8 1/2 is too over the top, yet still want to see a Fellini film that won't make them too crazy. And Giulietta Masina is perfect in the lead role.

Speaking of perfect in the lead role...If Andy Griffith hadn't later become the Sheriff of Mayberry in the iconic series The Andy Griffith Show in the 60's, he really could have had a career as a dramatic movie star...if things had panned out in that direction. This is one of Elia Kazan's movies that certainly has its fans and admirers, but few put it on a level of On the Waterfront or A Streetcar Named Desire. A Face in the Crowd is the story of Lonesome Rhodes a ne'er do well country boy groomed by Marcia (Patrica Neal) to become a radio star. Rhodes is a natural and soon grows to have a national falling. But with his rise, his ego takes over and...well things eventually go awry. There's a lot here (script by Budd Schulberg) about money, fame, advertising, promotion, and the gullibility of the public. It would definitely make my 1001 book, though it didn't make the actual book.

That being said, I'm glad Andy Griffith became Andy of Mayberry, and he did later show his dramatic chops in later 70's TV movies, including the rather campy Pray for the Wildcats...but I digress.

For more on Mr. Griffith, you might want to check out the recent book

Andy and Don: The Making of a Friendship and a Classic American TV Show by Daniel de vise.
------
Like A Face in the Crowd, Here are a few movies from 1957 that didn't make the 1001 list that I have seen at some point in my life.

Desk Set-Tracy and Hepburn are always worth seeing together, but as a librarian myself, the most exciting part of this movie is watching librarians be librarians!

The Delicate Delinquent-Jerry Lewis's first solo movie. Even seeing this as a kid, I thought it really seemed that Darren McGavin was basically just filling in for Dean Martin.

Fear Strikes Out-I liked this story with Tony Perkins as troubled baseball star Jimmy Piersall when I first saw it. I have a feeling it might not date very well.

Will Success Spoil Rock Hunter?-I saw this comedy with Tony Randall and Jayne Mansfield so many years ago but I do remember liking it. I remember laughing at the fact that the main character had the same name as a professional wrestler active at the time. That point doesn't seem all that funny now, but there you have it.

Man of a Thousand Faces-I have a hunch this biopic with James Cagney as Lon Chaney Sr. might be in The Fear Strikes Out category of seeming better when I first saw it than it would appear today. Or maybe not.

The Monolith Monsters-Another one that's been so long since I've seen that I had to look up the picture here to see what The Monolith Monsters looked like. I'm sure if you had giant rock thingees coming at you in real life it would be horrifying, but for a movie they appear about as scary as the killer bunnies in Night of the Lepus.

Old Yeller-Anyone got a tissue I could borrow?

The One That Got Away-The only German P.O.W. that ever escaped from a allied camp successfully. Wasn't that what it was all about?

The Strange One-This film about students facing a challenge at a military school may be worthy of a revisit.

The Pied Piper of Hamelin-Famous Made for TV version of the classic fairly tale and starring Van Johnson is something I must have seen at some point. I do know for sure I read the story in my Reader's Digest Book of Fairy Tales, the greatest book of fairy tales ever!

Witness for the Prosecution-I confess that the main reason I watched this movie recently is because I recently played a supporting part in a local theatrical production of it. It’s most interesting to see the workings of the British legal system, though I do find the ending a bit much.

Zero Hour!-This is that 50's film that Airplane! is based on. Have fun watching it in through that lens!

I also watched I was a Teenage Werewolf for the first time recently. Peter Biskind's book Seeing Is Believing: How I Learned to Stop Worrying and Love the Fifties sees a lot of the films released during this time politically. You have your right-wing films, your left-wing corporate films or your pluralistic films that cut it closer to the middle ideologically. It's an interesting read, even if you can watch most of these films and not detect any politics whatsoever. Biskind labels Werewolf as more of a right wing film because the teenage protagonist trusts the establishment head shrinker whose experiments turn him into a freakin' werewolf! Don't you think this kind of thing might be what led us to hippies in a few years? And the mad doctor at the end of this ideological horizon is Dr.Timothy Leary! Politics aside,  I watched the Mystery Science Theater 3000 version of Werewolf. Their take was less on politics and more on Michael Landon's obsession with milk throwing. One of the funnier episodes from one of my favorite series. 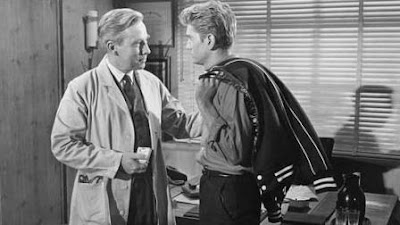 Michael Landon makes the mistake of believing Dr. Whit Bissell
In I Was a Teenage Werewolf