Jacques Tati's Mon Uncle and Satyajit Ray's The Music Room are very different films, but do seem to have a major theme in common: The modern world vs. the past.

The Tati film features the affable but unadaptable Monsieur Hulot (Tati), who tries to fit into the modern world by getting a job in his rich brother's factory. No matter how hard he may try, Hulot is unable to conform to the norms of his society. Many of his comedic failed work attempts are very reminiscent of Chaplin in Modern Times, which has often been cited. Hulot's businessman brother isn't without his share of problems, too. He seems to find more satisfaction in the mechanisms of modernity (circa 1958), such as a garage door that doesn't seem to work quite right and a giant metal fish in his front yard that his wife turns on only when the right people are coming by than he does on the natural life around him.

Mon Uncle is a pretty delightful film and might be my favorite of the Tati films on the 1001 list.

Ray's The Music Room is more somber story. A socially prominent Bengali leader named Biswambhar has financial problems that he is unable or unwilling to deal with. He escapes through music within his secluded palace with his wife and his bevy of servants. His life turns upside down when his family dies at sea. Meanwhile, a neighboring business man embraces the new economy and bides his time until he becomes the more powerful man and Biswambhar is left almost destitute and only with his music and remnants of past glory to sustain him.

Elements of Colonialism are certainly present. The man who comes to terms with the new world begins to thrive and adapt and Biswambhar can't and won't change until there is practically nothing left. A beautiful and sad film that makes me look forward viewing future films by Ray.
------

1. The Fly
Though I prefer the 80's remake, this original movie was awfully frightening to a little kid, especially when you're egged on with some of the scary lines in the movie by your big brother.

2. Ballad of Narayama
The 1983 version of The Ballad of Narayama is a more cinematic upgrade of the 1958 film of the same name about a 19th century Japanese village in which the tradition of taking those approaching their 70th birthday to a remote mountain to live out their life is the centerpiece. The newer film is more fleshed out and darker in some of the way the subplots are handled than in the original. I do think watching both films back to back is good viewing strategy .

3. Big Deal on Madonna Street
Another in a line of 50's heist films, this one starring Marcello Mastroianni and a young Claudia Cardinale.

4. Cat on a Hot Tin Roof
"Why can't you lose your good looks, Brick? Most drinking men lose theirs!" Classic Tennessee Williams with Paul Newman and Elizabeth Taylor. I'm a bit surprised that this didn't make the 1001 movie list. He did do more than just A Streetcar Named Desire, ya know!

5.Attack of the 50 foot woman, Colossus of New York, The Blob
Oh, those 50's horror flicks.

I keep thinking of the genetically modified giant goddess in Attack of the 50 foot Woman as being Anita Ekberg. It was actually Allison Hayes, but I guess I could watch it again and pretend it's Anita Ekberg


Colossus of New York is about a brilliant surgeon who gets his brain put in a robot body after he dies. That's about all I remember about this one other than Ross (Artemis Gordon) Martin was in it.


A young Steve McQueen and future Andy Griffith TV wife Aneta Corsaut try to keep a straight face as they battle a blob creature that wreaks havoc by oozing under doors and through the streets. Enough people take The Blob seriously to warrant a Criterion Collection release! One of the song writers credited with the goofy opening title song is Burt Bacharach!


6. South Pacific
Some Enchanted Evening, I'm Going to Wash that Man, There's Nothin' Like a Dame. Lots of standards in this Rodgers and  Hammerstein classic. I'm partial to the silly little ditty Happy Talk for some reason.

7.Damn Yankees
The movie version of the Broadway musical featuring Ray Walston as the Devil. I have seen this on stage with Dick Van Dyke as the devil. The team Joe Hardy plays for in the movie and I'm guessing during the original Broadway run was The Washington Senators. Since there were no Washington Senators after 1971, some stage versions feel the need to switch the thing to the Cleveland Indians. But I'm old school, so I'd certainly want to keep any production I see as the Washington Senators.

8. King Creole
I can't seem to go through any of  these yearly lists without listing an Elvis movie I've seen...

10. No Time for Sergeants
The film (based on the play) that really got Andy Griffith noticed nationally for the fist time. (The play preceded A Face in the Crowd).

It's interesting that the hick he plays in No Time for Sergeants is similar to his character in the first few episodes of The Andy Griffith Show. It was decided (wisely, in retrospect) to tone down the character of that series to make him more of the steady center of the show around the assorted eccentrics of Mayberry after that.

Noted as being one of George Lucas's chief inspirations for Star Wars, this is another Kurosawa film to be seen, Star Wars or not.

12. The Magician
Really liked this when I saw it at the Rhodes Theater in Atlanta in 1985. Still like it, but wouldn’t put it in my Bergman favorites, as there’s a bit too much of Bergman trying to shoot back at his critics. It did have a lot to say about how things aren’t always what they seem.

13. A Night to Remember
A Night to Remember, based on the book by Walter Lord's book about the sinking of The Titanic, is more of a true ensemble piece. The closest thing the film has to a main character is Mr. Lightoller, played by Kenneth More. The funny thing is that one of the criticism distributors in the United States had with this movie is that there wasn’t really a star, (James Cameron made sure with his later film that this wouldn’t be an issue for his film about the same subject) but I agree with the assessment that the ship is the star. Yes, they get some of the technical points wrong, as they didn’t know the boat split in half until years later. That didn’t bother me too much, as the stories on board were still moving.

14.  Old Man and the Sea
The film based on Ernest Hemingway's book is basically a one-man show. And since much of the film had to be done with voice over narration while the fisherman was out to sea, this film really needed an actor with stature to pull it off. Luckily, they picked Spencer Tracy, possibly the greatest American screen actor of the 20th century. He actually succeeds for the most part, though The Old Man and the Sea is slow going at times.

15. Thunder Road
I honestly remember Robert Mitchum's song "The Ballad of Thunder Road" more than I remember the movie itself because my brother had the single below whose lyrics have stuck in my mind all these years later..."Moonshine, moonshine to quench the devil's thirst. The law they swore they'd get him but the devil got him first!" Turning me on to this pretty cool single makes up a little bit for his scaring me about The Fly. 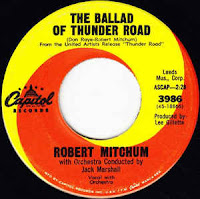