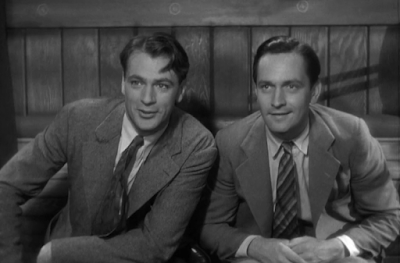 Ernst Lubitsch's Design for Living did not make the 1001 movie cut, but is certainly a must see for all you pre-code Hollywood film junkies (a select and admirable group, I must say). Gary Cooper and Frederich March are two Bohemian artist buddies living in Paris who meet up and fall for the attractive Miriam Hopkins. Ms. Hopkins works for the stuffy Edward Everett Horton who could in turn help the boys with their careers if they play their cards right. The clever goings on can be credited to writers Noel Coward and Ben Hecht, as well as Lubitsch and his stars. I also don't know if the way Miriam Hopkins jumps around from man to man in this film would have passed the muster after the Hays code was passed the following year, but it's hard to imagine the film working without it.

And the Elisha Cook Jr. supporting player award goes to...Edward Everett Horton
Edward Everett Horton was one of Hollywood's top second bananas for years, mostly in films in the 1930's and 40's.. His wit and articulate speech seem made for a film like Design for Living,  though you know he isn't going to succeed in his ultimate quest for the girl...even if she does marry him! Other movies I've seen Horton in include: Top Hat, Arsenic and Old Lace, Alice in Wonderland (1933, as The Mad Hatter), Lost Horizon (as the paleontologist), Here Comes Mr. Jordan, It's a Mad, Mad, Mad, Mad World and Lubitsch's Trouble in Paradise 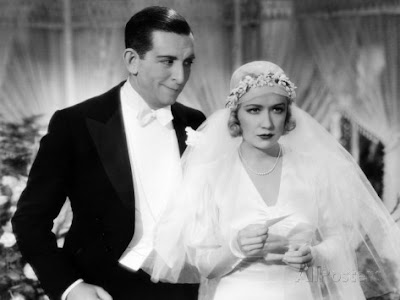 
I first became aware of Horton (even if I didn't know his name) as the narrator on the classic cartoon Fractured Fairy Tales. This segment was part of the Rocky and Bullwinkle show and Horton's wonderfully dignified voice added much to the rather goofy antics of the cartoon itself. 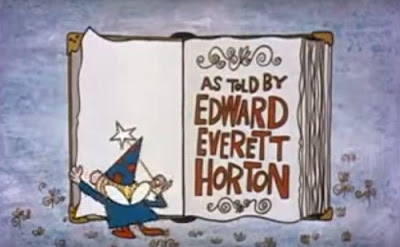 
He also played the politically incorrect Chief Roaring Chicken in several episodes of the 60's sitcom F-Troop, which I still have fond memories of watching with my mother.

He parodied his F-Troop as Chief Screaming Chicken in an episode of Batman. 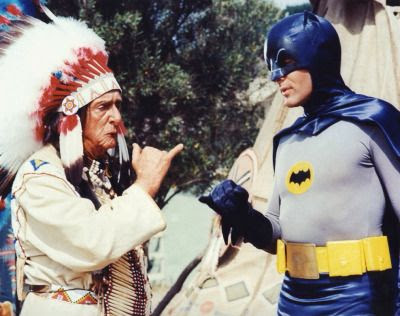 Edward Everett Horton and Adam West
in Batman
Posted by 1001: A Film Odyssey is produced, directed and written by Chris, a librarian. at 11:22 AM