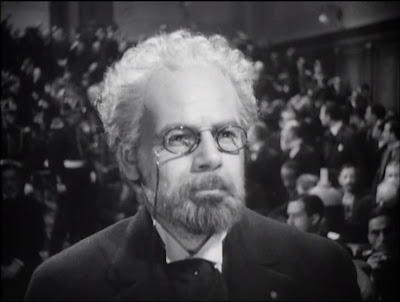 The Life of Emile Zola won the Best Picture Academy Award and gave Paul Muni one of his signature biographical roles as Zola. The movie depicts his humble beginnings and shows his success as a writer in later years. One of the major plot points involves Zola's later decision to risk his comfortable life and work on the case of Alfred Dreyfus, falsely accused of being a traitor. Zola's speech in court on behalf of Dreyfus is one of the films many highlights.

And the Elisha Cook Jr. supporting player award goes to...Joseph Schildkraut
The distinguished Austrian had different stages to his long acting career. He made a name for himself in silents as a leading man in D. W. Griffith's Orphans of the Storm and later as Judas in Cecil B. Demille's  King of Kings.

He made a smooth transition to talkies, including a role as a conniving clerk in Ernest Lubitsch's The Shop Around the Corner. His pivotal role as Alfred Dreyfus in Zola won him the Academy Award for Best Supporting Actor of 1937.

In later years, he played Otto Frank in the film version of The Diary of Anne Frank in 1959. I think I know him best as a ghostly concentration camp victim in an episode of The Twilight Zone. 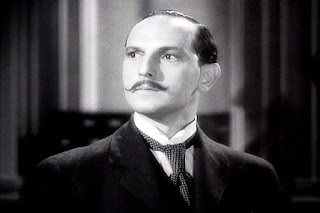 Joseph Schildkraut as Dreyfus in
The Life of Emile Zola 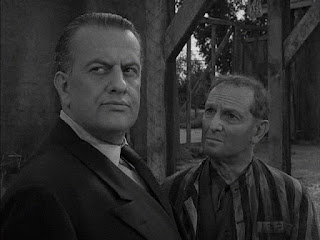 Joseph Schildkraut (with Oscar Beregi)
as a concentration camp
victim in Death's Head Revisited of
The Twilight Zone
Posted by 1001: A Film Odyssey is produced, directed and written by Chris, a librarian. at 11:26 AM