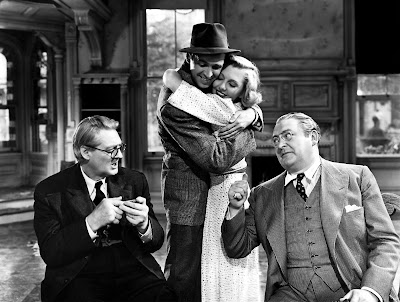 Lionel Barrymore, Jimmy Stewart, Jean Arthur, Edward Arnold
discuss politics, romance and right and wrong
in You Can't Take It With You

You Can't Take it With You is a film (based on the successful Kaufman and Hart play) that is about a man from a financial well-to-do family (Jimmy Stewart) who falls for a girl (Jean Arthur) who is from a family of eccentrics (led by the grandfather, Lionel Barrymore). There are lots of fun goings on and it isn't too hard to not picture this film as being adapted from the stage. In the end, The lovable Vanderhof family (led by Barrymore) get the best of the business minded Kirby family (led by Edward Arnold)...but no surprise there.

First is Dub Taylor. You Can't Take It With You is Dub's first screen credit. He racked up over 250 more movie and television credits during his career, culminating with Maverick in 1994. I always picture Dub as a grizzled prospector, but he played a variety of roles, many times as a heavy, and almost always in just a scene or two. Dub's memorable roles includes the guy that sets up Bonnie and Clyde in Bonnie and Clyde, the Reverend giving a sermon in The Wild Bunch and one of the three saloon old-timers (with Harry Carey Jr. and Pat Buttram) in Back to the Future III.

I'm guessing his role in You Can't Take It With You as the former Alabama football star who plays the xylophone is his only role where he gets to show off his xylophone skills, but I haven't researched it too thoroughly. 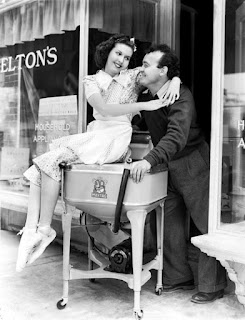 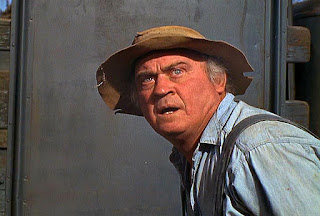 Dub Taylor before the bullets fly
in Bonnie and Clyde

Charles Lane had an even longer career than Taylor. In You Can't Take It With You, he plays a stern, humorless IRS agent. He also plays Potter's associate in Capra's It's a Wonderful Life. It seemed like a stern and humorless suit without a heart is about the only part he ever played. He may be remembered best for the recurring role of Homer Bedlow on the sitcom Petticoat Junction, where he plays a stern, humorless suit (as always) who just wants to shutdown the train because...why does he always want to shut that train down again? Lane's sixy-five year career included 365 movie credits. About the only sympathetic part I can ever remember seeing him in was an episode of L. A. Law where he played an elderly bank robber. Lane died in 2007 at the ripe old age of 102.

No respect for the character actor: On the DVD extra for You Can't Take It With You, Frank Capra Jr. says something to the effect of "my dad always liked this actor, he used him often" during Lane's scene. You get that? Lane didn't even get his name mentioned in the commentary by the director's son even while praising his work!...Ah, the life of the character actor. 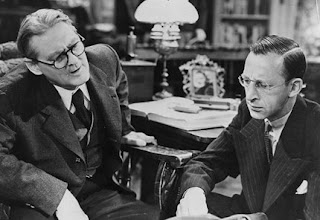 Lionel Barrymore gets the best of  I. R.S. worker
Charles Lane in You Can't Take It With You 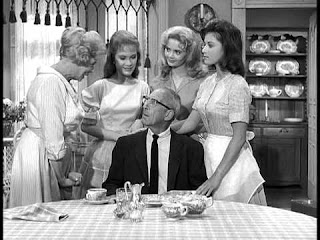 Homer Bedlow (Charles Lane) schemes to shut down
the Hooterville train in an episode of Petticoat Junction.
I still can't remember why he wants to shut down
that damn train!
Posted by 1001: A Film Odyssey is produced, directed and written by Chris, a librarian. at 9:30 AM