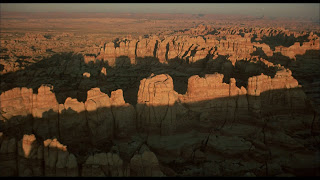 Today's double feature starts with Godfrey Reggio's Koyannsqatsi. It is a film of images without narration, but with a constant score by Phillip Glass enhancing the images. It's about nothing and yet about everything. We see a lot of natural images...mountains, rivers and such. Then we see man made architecture, skyscrappers, demolition and such. We see a lot of human activity then...much of it speeded up. Director Reggio says the movie has different meanings to each viewer (even if you think it's crap-his words). It was a nice experience...I may want to check it out again...maybe after some fasting....or meditation...or peyote. 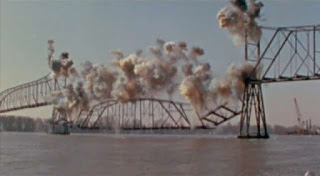 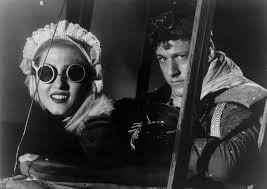 Archangel in the air

Just when I was lulled into a zen state with the non-narrative Koyannsqatsi, I was bombarded by more images from Guy Maddin's Archangel, a film about...what was it about again? This one I was supposed to draw something from the narrative...I know it showed some Canadian involvement in the Bolshevik revolution...World War I...bravery....flying...repeated images and a look that is very reminiscent of a silent movie..some pretty graphic gross out scenes. I admit I'm writing about this a few weeks after viewing and I'm having trouble remembering many plot details. I checked Wikipedia for the plot summary and there were apparently a lot of things that happened in Archangel that didn't stick with me. Meditation or fasting probably won't help with this one...maybe straight to the peyote. 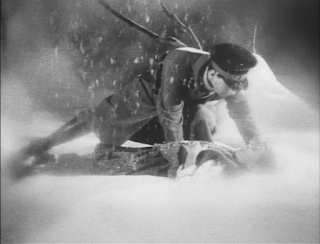 Archangel on the ground
Posted by 1001: A Film Odyssey is produced, directed and written by Chris, a librarian. at 7:42 AM