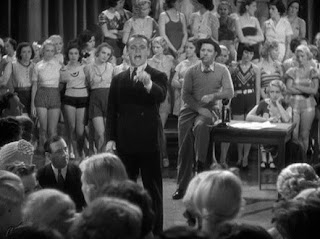 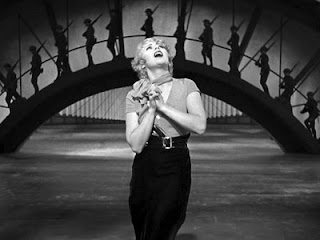 Looking at the 1001 Movies list, you realize quickly what a small number 1001 is when you are talking about 100 + years of films. You could make a pretty good supplemental list, but 1065 Movies You Must See Before You Die doesn’t quite have the same ring to it. So the obvious question is which films should be cut?

I have a definite fondness for the old Busby Berkeley musicals from the 30’s. I really like them better than many of their more glitzy MGM musical counterparts. And I do think one of these films should definitely be on the list.

But 1001 Movies lists three. Do we really need three?

So I’m taking it onto myself to cut two. I’m appointing myself the coach and there’s only one position at flanker open. It’s a tough profession, kiddo. Thems the breaks sometimes.

Footlight Parade
Footlight Parade does boast a nice role for Jimmy Cagney, who gets to show off some dance moves along with his usual fast talking characterization. (Could Cagney ever talk slow?). Also funny, if somewhat whiny, is Frank McHugh as his constantly pessimistic dance director. Joan Blondell is also on hand as the swooning secretary, but I honestly like her in Gold Diggers more. And there are plenty of other Cagney movies on the list. (Can you tell I’m trying to eliminate Footlight Parade and get to the other two movies?) Fun and impressive production numbers from Mr. Berkeley including Sitting of a Backyard Fence. (Dancing cats long before that musical with Rumpleteazer came out). It’s also interesting historically that Cagney’s character is doing prologues before the featured films to enhance the new talking-picture experience.

See the film by all means. But I’m sorry, Footlight Parade is cut. You’re a swell kid, but you’re just not my choice.

Gold Diggers of 1933
As I said, Gold Diggers of 1933 is my favorite of the three. It begins with the famous production number We’re in the Money featuring a young and saucy Ginger Rogers. It’s a strong start to the movie, though I could have done without her singing part of the song in Pig Latin.
Insufficient funds and the show shuts down. But tough talking, cigar chomping producer Barney (Ned Sparks) has a new show to make everyone forget about the depression, it’s well, no, it’s actually about the depression.

We meet the girls in the production, each of who embody certain types. They sort of remind me of a younger, depression era version of The Golden Girls.
There’s Fay (Ginger R. playing the slut), Polly (Ruby Keeler, the sweet innocent) Trixie (Aline McMahon, the wisecracking one who steals ever scene she’s in) and Carol (Joan Blondell, the star).

Keep in mind these films were made before the infamous Hayes code neutered and spayed American movies after 1934. Ginger Rogers later went from the sexy young dancer in these films to the elegant and sophisticated dancer in the Rogers-Astaire films. Joan Blondell went from the sensuous blonde who casually brushes her hair while almost falling out of her slip in this film to a respected “comedienne” in Topper Returns and other films. (Never been too happy with Mr. Hayes!)

Continuing with the plot: The girls hear juvenile crooner Brad (Dick Powell) playing the piano in the next apartment. Polly has a thing for Brad. (Of course, Dick Powell and Ruby Keeler have a thing for each other in every Busby Berkeley musical.) As only happens in the movies, Barney hears Brad on the piano from the girl's apartment and thinks he’s different and has class and wants him to do the music for the show. He does. But Brad has a secret and won’t appear in the production, but somehow has the money to help finance the show.

To make a long story short, the show opens, Brad has to go on and is discovered to be from a prominent family. Brad’s older brother Lawrence (a rather stiff Warren William) wants to get rid of this showgirl Brad’s been seeing. He and family lawyer Fanny (Guy Kibee, who is in all three of these films) come to buy Polly off. However, Lawrence mistakes Carol for Polly and the girls and Brad decide to teach the older brother a lesson.
However, Lawrence falls for Carol as Polly. Carol falls for Lawrence as himself. Brad and the real Polly get married. And to top it off, old duff lawyer Fanny falls for Trixie and they too get married! And of course Lawrence and Carol also plan to get married. (Just wondering: Are Brad and Lawrence’s parents still alive? What would they think if both their blueblood sons announce their marriage to showgirls simulataneously and I think I thought this through too much.)

The show goes on and ends with the extravagant number Forgotten Man. (Joan Blondell succeeds in making this the sultriest song about unemployment I’ve ever heard).

Still a fan of the film and I’m thinking about going ahead and putting Gold Diggers of 1933 on my team…no, I’ve got one more to go.

42nd Street
In 42nd Street, stage director Julian Marsh (broke, sickly, obsessed and well played by Warner Baxter) tries to make a success of his production of a show called Pretty Lady.
Ginger Rogers is back. Don’t mean to say she’s playing a slut here too, but her character is known as Anytime Annie. Guy Kibbee is also on hand again as Abner Dillon, the production’s financial backer who is only happy when star Dorothy (Bebe Daniels) pays attention to him. Eventually, Dorothy gets tired of coddling Abner and throws him out. Dorothy also sprains her ankle. She can’t go on! Abner finds a new star for the production-Anytime Annie! But Annie knows that she can’t pull off the staring role, but knows someone who can—chorus girl Peggy (Ruby Keeler again and yes she does end up with Dick Powell!)

Before understudy Peggy goes on, Dorothy comes up to her with tears in her eyes and quivering lips and says, “Now go out there and be so swell that you'll make me hate you!” Corny? Maybe. Effective? Definitely. And why don’t we describe people as being swell anymore? I think the word in this context is ripe for a comeback.

It’s really the film in this series that’s the best showcase for Ms. Keeler. Her tap dance to the 42nd Street production number is one of the most famous bits in any musical.

Gold Diggers of 1933, you’re pretty swell, but I hope you can catch on with some other list as I’m changing horses in midstream and going with 42nd Street. 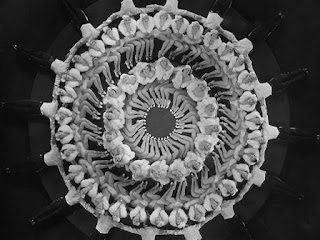 Posted by 1001: A Film Odyssey is produced, directed and written by Chris, a librarian. at 7:48 AM