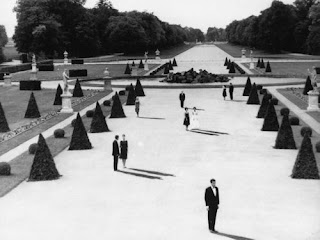 What is the scariest film on the 1001 movie list? The Excorcist? Psycho? Halloween? Nightmare on Elm Street? There are many candidates, but there is only one movie that has struck such fear through my heart that I have avoided it for thirty years. But because I am trying to go through every type of movie on this blog, I am going to take a deep breath and watch the one movie that I have never quite been able to muster the courage to view before. I am talking about...Alain Resanis’ 1961 film Last Year at Marienbad.
Some viewers have found it the greatest work of art ever put on celluloid. Many others…many others have been driven to madness or have tried to burn down the theater in which it is shown. I can only hope I feel more of the former than the latter.

The crack SWAT team emerges from their vehicle and trot to the bottom of the library’s front steps. They are equipped with bullhorns and begin to speak to the librarian (known as C) who is hanging precariously from the ledge of the top floor of the building.

Captain Renault: What a wonderful bibliotheca you have here C. Why don’t you come down now, mon ami?

C: (Yelling down): No, I’m too upset with what I have just seen. My entire sense of reality has become something I don’t recognize. Last Year at Marienbad (He struggles to get the very words out) has forever corrupted my sense of reason.

Corporal O’Reilly: Perhaps this will help. (He holds a copy of Cahiers du Cinema and starts to shake it)

C: No, It’s too late for any crash course in critical theory.

Lieutenant Dan: Don’t be that way. I’ll buy you a cup of joe and a Cuban and we can discuss the pros and cons of the auteur theory.

C: Are you trying to talk me down or make me jump? I don’t buy into that…At least I don’t think I do…You see, it’s made me so confused!

General Turgenson: Boy, you just can’t accept a solipsistic viewpoint. You just don’t have the guts to take the bull by the balls and be in control!

C: Why is that my responsibility? Isn’t that the filmmaker’s job?

Ensign Pulver: Come on! Aren’t you grown up enough to accept a modernist approach?

C: Don’t yell at me! (He puts his hands up to his ears) Everyone’s yelling at me!

Captain Picard: Maybe the whole reality of that world was based on an implementation of holographic image reality.

C: (He throws his hands down in disgust) Come on Patrick! That’s nonsense.

Private Benjamin: And what about the rape scene?

C: There was no rape scene, Goldie! It wasn't Straw Dogs! Trying to pinpoint a rape scene is just critical propaganda; it’s not the truth.

Captain Spaulding: Is Cubism somehow involved? It’s like the time I shot an elephant in my pajamas. How he got in my pajamas I’ll never know.

C: (now laughing) That joke is still funny. I needed that.

Private Ryan: And you got to admit, the mise en scene was very impressive

Warr Officer Paul Brenner: And it did start to grow on you after awhile. Admit it.

C: Well, maybe a little. The organ music seemed less frightening in the second part. And some of those visuals, I’ve got to admit they were pretty impressive.

Private Benjamin: And the rape scene?

C: (Nodding acknowledgement) Yes, I guess it might have been a rape scene at that if you choose the right school of interpretation.

C: Me too, Marlon. I just sat through Grease afterall!

Officer Krupke: So you coming down, kid?

C crawls through the library window. He becomes temporarily enamored with his comeover in the reflection of the elevator mirror as he heads to the bottom floor. He makes his way down a seemingly endless corridor to the front door.

C hears the applause of the SWAT team as he descends the steps at entrance of the library. When he comes out, C notices the SWAT team members have become frozen in place.

C wonders if they are frozen in time as well, loses his train of thought, shrugs, and goes home.
Posted by 1001: A Film Odyssey is produced, directed and written by Chris, a librarian. at 6:48 PM