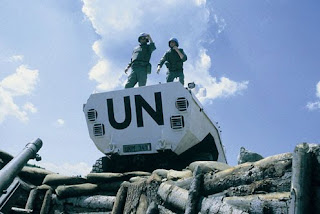 You know those You Tube or Jay Leno videos where they ask Americans simple questions like “Who is the vice-president?” and they say Donald Trump or “Who was the first man on the moon?’ and they say Don Knotts or “Name a country that starts with U” and they can’t come up with anything. (You people haven’t heard of Uzbekistan?)

Anyway, I’ve never seen a movie filmed primarily in Bosnia-Herzegovina, let alone one about the Bosnian war. The only choice I have in this regard and still sticking with the 1001 canon is the 2001 Danis Tanovic film No Man’s Land.

Labeled a black comedy, it doesn’t make light of ethnic cleansing, but it does make light of the folly of war. I try to not use the term anti-war because it makes me think of Kurt Vonnegut’s quote from Slaughterhouse-Five, “writing an anti-war book is like writing an anti-glacier book, both being futile endeavours, since both phenomena are unstoppable.” Besides, if something is anti-war, isn’t it from the perspective of the losing side (All Quiet on the Western Front)? If it’s from the winning side (Saving Private Ryan) would that be pro-war?

In No Man’s Land, we have two soldiers from opposing sides in the conflict thrown together. A third has a bomb underneath him that will detonate if he moves. Every time it seems the two main soldiers are beginning to bond, they end up shooting or stabbing each other and whichever one manages to get control of the gun makes the other say that their side started the war.

We also learn that UN peacekeepers are well meaning and ineffectual and journalists are vultures. My favorite line in the movie is after a shooting, the journalist’s instinct is not to help or feel the horror, but to turn to the cameraman and say, “Did you get that?”

I kept wondering where I had seen actor Simon Callow before. The answer according to IMDB was the performer that pays off Mozart in Amadeus. How did I ever manage before the Internet Movie Database?

A good film with universal themes even if you don’t know who Slobodan Milošević is.
Posted by 1001: A Film Odyssey is produced, directed and written by Chris, a librarian. at 6:53 AM