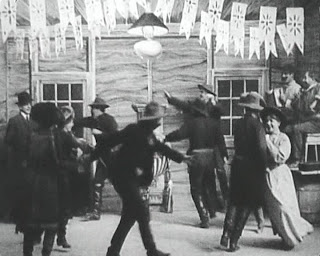 Bronco Billy: HEY! You boys need to simmer down. We got big problems here!

(Justus and Frank stop their dance and stare at him)

Justus: What you mean? We got the gold!

(Justus throws a handful of gold pieces at Bronco Billy)

Bronco Billy: The gold? And what is it you’re planning to do with all that gold?

(Justus and Frank give each other a confused stare.)

Bronco Billy: That’s right. You have no idea! And do you know why?

Bronco Billy: Cause we was spose to be killed by a posse and that was gonna be the end! That’s why! Your fellas ain’t even real.

Justus: Ain’t real? You been smokin' that Injun loco weed? And how is it you know so darn much? And whar is this here posse?

Bronco Billy: They was gonna ambush us in our regular hidin’ spot. That’s why I made you fellas come here instead.

Bronco Billy: Think about our regular hiding spot that we was going to. Do you ever remember bein’ thar before?

Bronco Billy: That’s cause we AIN’T never been thar before. It’s just our reglar hiding place cause the script says so.

Justus: Because the what says so?

Justus: (Scratching his head) Never thunk about it.

Bronco Billy: That’s cause you’re thinly written. But I thunk about it. And while we was riding a ways back, I slipped my hand into the black space and came up with this.

Frank: What’s this? We can’t read.

Bronco Billy: Written here is all that we are. All we’re suppose to do. We did just what it said to the last part when I took us a detour to here.

Justus: This is crazy talk! You’ve been drinking some kinda moonshine.

Bronco Billy: All right smart boys. Tell me what is it you are plannin’ to do with all that gold?

Frank: I don’t reckon I know. What was we gonna do Justus?

Justus: (Thinking for a moment) I got it! Women!

Bronco Billy: And what is it an outlaw is suppose to do with a woman? Tell me.

(Justus and Frank think for a moment.)

Justus: I got it again! Virginia Reel!

(Frank and Justus throw down their guns and begin hooting as they grab each other by the arms spinning as if doing the Virginia Reel.)

Bronco Billy: Stop It! The only thing you know about women is doin’ the Virgina Reel with ‘em cause that’s all that’s in this here script! Us cowboys won’t get fully developed for more until later through the films of Ford, Hawks, Mann and Leone.

(As the outlaws quit dancing they look at Bronco Billy in silent confusion.)

Bronco Billy: Never mind. I’m not sure whar that came from myself. Anyway, remember when you shot that guy at the station, how he flailed around like a chicken with his head cut off, grabbed his heart and plopped to the ground?

Justus: Yeah! Got him good.

Bronco Bill: NO! People don’t react that way to being shot. And there was no blood! Not a drop. And when you threw that guy off the train. That was no man. It was just a stuffed dummy.

Frank: Come to think about it Justus, He did feel kinda light.

Bronco Billy: And didn’t you notice how the scenery kept changin’ behind us while we was up on the train?

Frank: That’s why I got so dizzy!

Bronco Billy: (Slapping the script in his hand) We is in something called a movin’ picture.

Justus: I’ve seen pictures o' course. But how does they move?

Bronco Billy: Don’t rightly know. Guess if you run them together fast enough, they kinda tell a story.

(The other two outlaws look at each other and begin to laugh. As Bronco Billy doesn’t return their laughter they stop. The three outlaws now contemplate in uncomfortable silence.)

Justus: So what happens next?

Bronco Billy: I don’t know. I think we have to do things on our own now.

Bronco Billy: What in tarnation do you think you’re doing?

Justus: Seems to me like we was doin’ fine til’ you brought up that big lump of paper. Maybe that thar’ script jus’ needs a new endin’.

(Justus fires at Bronco Billy who drops to the ground, grabbing at his bloodstained chest.)

Bronco Billy: You fool! The posse will for sure come for you now.

Justus: You was right Billy. That’s real blood this time.

(Bronco Billy dies. The posse hears the shots and comes riding toward the outlaws. Frank runs to pick up his guns. Before he can reach them, a bullet from the posse explodes in his head killing him instantly. Justus grabs his gun. He turns and fires into the black space one last time.)

THE END
Posted by 1001: A Film Odyssey is produced, directed and written by Chris, a librarian. at 4:50 AM