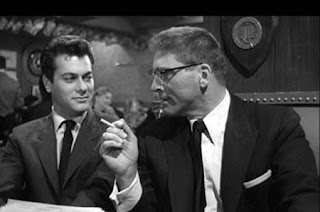 I just finished watching the 1957 film, Sweet Smell of Success. Hmmm.
You know, I’m not really a professional movie critic and I’m a little stuck on what to say here.

Looks like I’m going to need some extra help on this one and since the whole film is set in New York City, I’ll go to the original source and see what New York Times critic Bosley Crowther said about it when it came out in 1957:

Sweet Smell of Success has caught the mannerisms and the language of the hustling guys and dolls in search of power, fame and a fast buck. -Bosley Crowther.
(Hey, that’s more like it. Succinct and to the point. -Me.)

The basic motivation of J. J. Hunsecker (Burt Lancaster), the columnist sought after by the famous and infamous, remains unexplained. -Bosley Crowther
(I have to disagree here. Hunsecker’s motivation is not wanting his precious sister taking up with a Jazz musician, even if the musician really seems to be an okay guy who doesn't even smoke marijuana! -Me)

Much clearer is the mental makeup of Sidney Falco (Tony Curtis) the publicist who has practically devoted body and soul to getting “items” muddy or otherwise into Hunsecker’s syndicated columns.-Bosely Crowther
(I can still remember the day when newspapers were important. Wasn’t it like three years ago? -Me)

Susan Harrison evokes sympathy as the columnist’s distraught sister. - Bosley Crowther.
(As she does as a ballerina in the “Five Characters in Search of an Exit” episode of The Twilight Zone. Just like to slip in a Twilight Zone reference every once in awhile. -Me)

Martin Milner is sincere and believable as her indomitable romantic vis-à-vis. -Bosley Crowther
(I just added this quote because I can’t ever remember ever typing out vis-à-vis before.-Me)

It is not a towering, universal theme the producers have developed in their indictment of this small, special segment of society operating in a tiny domain know intimately only to the cognoscenti. -Bosley Crowther
(Mr. Crowther really liked to throw out four-dollar words like “cognoscenti.” In a separate review, he refers to Liberace as being in “oleaginous” form. Though I’m still not what sure it means, I’m willing to bet Liberace was often most "oleaginous." –Me)

The characters are mighty interesting but rarely lovable. -Bosley Crowther
(That about sums it up. Thanks for the help, Bosley -Me)
Posted by 1001: A Film Odyssey is produced, directed and written by Chris, a librarian. at 9:45 AM