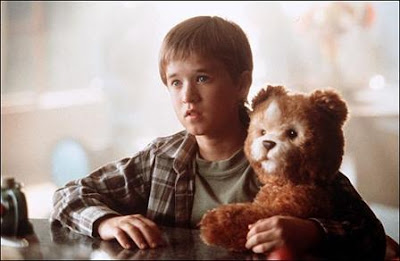 Uncolor Me Kubrick: A. I. Artificial Intelligence

One of the most frustrating things about looking at the film career of Stanley Kubrick, is that he was such a perfectionist that he made so few films. The Shining came out in 1980 and it was seven years before Full Metal Jacket was released. Then it was twelve years before his final film, Eyes Wide Shut came out. And then the final credits rolled. Where was that great biopic of Napoleon that he researched? Jack Nicholson in Stanley Kubrick’s Napoleon? What about Kubrick’s holocaust movie? What about Artificial Intelligence?

Well, Artificial Intelligence was made, but not by Kubrick, of course. Steven Spielberg tried to make it in the style that Kubrick would have wanted, but it really feels much more like a Steven Speilberg picture more than a Stanley Kubrick picture. The brand of sentimentality of the robot boy searching for the elusive blue fairy is definitely more Speilberg than Kubrick. The high spectacle of the flesh fair scene where the robots are exploited for sport (and my favorite scene in the film) is also definitely more Spielberg than Kubrick. The film does leave a lot of unanswered questions. That's like Kubrick. Like why does the robot child and Gigolo Joe have to go to the flooded out Man-hattan to find the Professor. I know it looks visually spectacular but where the heck is that to have a place of business? Of course, I can't really explain the end of 2001 (which is sort of the point, I think) so I guess it is like Kubrick in some ways.

Posted by 1001: A Film Odyssey is produced, directed and written by Chris, a librarian. at 2:19 PM