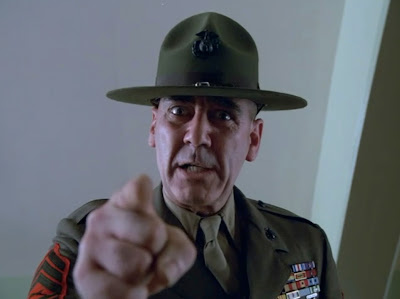 Full Metal Jacket is broken into two sections. The first section has a platoon of Marines being trained by a colorfully relentless drill instructor in preparation for Vietnam.

The second part of the film has one of those Marines actually joining a platoon on the actual field of battle.

The first time I saw it, the problem I had was that the first part was so intense, it made the second section pale by comparison. However,on my most recent viewing, I really appreciated the second part as well, especially the platoon’s desperate search to find a sniper.

1.It’s hard to break his scenes down into one, so I will just say any part with D. I. Hartman (Lee Ermey) addressing his troops. As long as he's not talking to me, I could listen to Lee Ermey all day long.

2. The desperate attempt of the platoon looking for the hidden sniper.

3. The final confrontation between Pvt. Lawrence and Hartman. And what emotional depths did Vincent D'Onofrio have to go to come up with that maniacal stare? 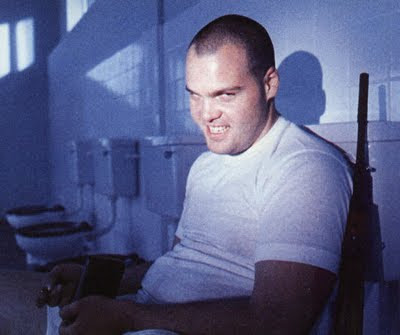 Posted by 1001: A Film Odyssey is produced, directed and written by Chris, a librarian. at 1:58 PM