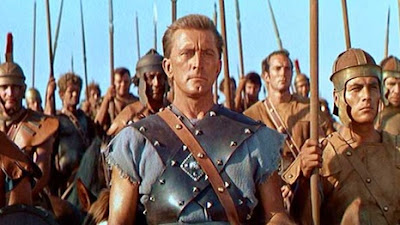 Spartacus
Some Kubraphiles and even Stanley himself dismiss this as not really being a true Kubrick film, but I think it is a pretty good addition to the sea of epics that were released during this time.

1. Pretty much any scene with Peter Ustinov where he begins improvising dialogue to such a degree that the film seems set to break into an Airplane! style parody at any moment.

2. The film's most famous line features the Roman slaves all claiming to be the leader of the slave revolt in order to protect him from the evil Crassus.
I am Spartacus!

Posted by 1001: A Film Odyssey is produced, directed and written by Chris, a librarian. at 2:14 PM