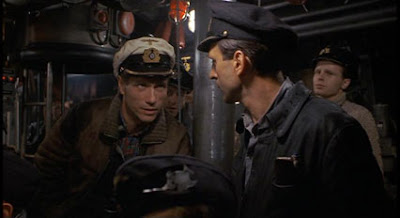 Why haven’t I seen this before?

It's one of those movies that you heard about and heard how much people loved it but you just never got around to seeing.

Even in later years, I heard talk about what a great movie this was. But the bottom line is that I just never had the motivation to sit and watch a three hour movie set almost entirely on a German sub. But now I’m ready. Or at least I'm going to try to make myself ready.

After viewing? First, Das Boot is a bit long at three hours. We are dealing with a movie that spends 90% of its time locked up on a sub with these Germans. And although,these guys may be Germans, they never seem like Nazis fighting for Hitler and the Third Reich even though that's what they're doing! We never see their enemy (the Brits) so there is no counterbalance of sympathy possible. The Germans on the sub are just soldiers doing their job and when horrible things happen to them, you begin to feel not only bad about what befalls them but even worse that you are feeling bad about the side that history recorded as the ultimate evil!

Damn you for making me feel this way, Das Boot!
Posted by 1001: A Film Odyssey is produced, directed and written by Chris, a librarian. at 11:37 AM