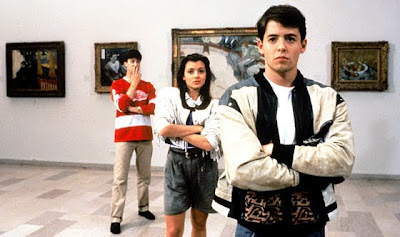 Why haven't I seen this before: I actually have seen parts of it. I have never really understood the movie stardom of Matthew Broderick, but Ferris Bueller is on the list and I’ll give it a go.

After viewing: For the romp it is, it isn’t too bad. Many can relate to 80’s high school hooky players with the 80’s designer names: Ferris, Cameron and Sloane-all being pursued by the persistent but always faltering principlal Mr. Rooney.

We know Ferris and his friends will thwart Mr. Rooney in the end. You know there will be the potential for growth for Cameron, his never seen father and their red '61 Ferrari-This is an 80’s movie after all. But what if this movie had a more 70’s type ending? I think it would go something like this.

Ferris, Sloane and Cameron are playing hooky again. We see them outside driving the '61 Ferrari down a road, clearly outside the busy streets of Chicago and their safe neighborhood of privilege.

Cameron and his father have clearly had a moment of understanding, since the car has been restored and he is letting Cameron drive it. The joy the three of them feel as they are speeding down the road is clear.

It is then that Ferris spots an image in the distance, which causes Cameron to slow down. A mysterious figure is blocking their path. As the Ferrari approaches the figure, they see a Harley Davidson parked sideways in the middle of the road. A leather cladded figure wearing a helmet with an American flag decal gets off the bike and approaches them.

It is then, the group notices that this figure is carrying a shotgun. He pulls off his helmet. It is none other than their principal, Mr. Rooney!

Mr. Rooney's only words (which he says inexplicably in a rural Louisiana accent) are “Why ain’t you kids in school?”

We see the shocked expression on their faces as Mr. Rooney turns the gun in their direction.

The first shot flies out of the rifle and hits Cameron in the chest. Ferris grabs onto his slumping friend, who looks back into Ferris's eyes and says, “Ferris, we blew it,” before closing his own eyes for the last time.

Sloane screams as she leaps out of the car and begins to run away, only to be cut down by a single shot from Rooney’s shotgun.

The blood soaked Ferris leaps out of the car and runs madly toward Rooney. Rooney takes careful aim before taking his final shot in Ferris’s direction.

We don’t actually see Ferris get hit. Instead we see the symbolic image of the Ferrari exploding into a fiery heap.

Cut to an aerial shot that clearly shows the carnage below as Mr. Rooney speeds away on his motorcycle. As the picture continues to ascend, we hear the strains of Fraternity of Man’s Don’t Bogart That Joint on the soundtrack. As the credits begin to roll, the song then changes to one more round of The Beatles version of Twist and Shout. 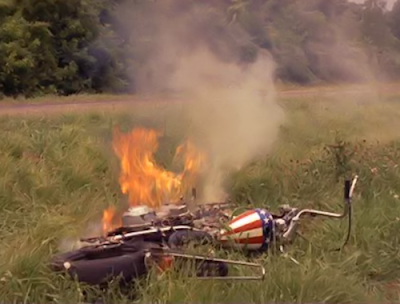 Posted by 1001: A Film Odyssey is produced, directed and written by Chris, a librarian. at 2:37 PM