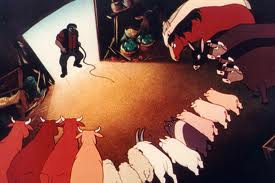 Why do Boxer, Clover and Benjamin have descriptions of greater depth than the other animals?

Did the rebellion on Jones’s farm happen too soon for the animals to have a workable system in mind for when they took over?

Oh, hello. I was just doing some studying with my niece Krista. She’s entering high school and is trying to come up with questions on her assignment for George Orwell’s Animal Farm.

How much foreshadowing is there in Clover’s mentioning to Boxer that he should take it easy?

It just so happens the 1954 animated version of Animal Farm is in the 1001 Movies You Must See Before You Die book, so although I'm certainly happy to help her with her assignment, I’m also glad to get a chance to view a movie I haven’t seen in at least twenty years.

How much abuse will the animals tolerate under the dictator pig Napoleon before they rebel?

Despite its lighter moments, I find this film difficult to sit through at times. It isn’t because the film isn’t good-in fact it’s very good. It’s just that seeing bad things happen to animated animals can really be upsetting.

Do the humans begin to respect Napoleon more because he is becoming more like them or are they merely opportunists?

The DVD copy in our library is in the children’s section next to Bob the Builder and Dora the Explorer. I’ve got to think there was a cataloging mistake somewhere down the line.

If Snowball had run off Napoleon, would the outcome have been different?

If Snowball had run off Napoleon, would the outcome have been different? Hmmm.
Good question. Does absolute power corrupt absolutely? Do we have movie references to help us answer this question? Michael Corleone? Charles Foster Kane? How about well..I’m sure you can come up with other examples. Anyway, back to the books for now, cause school is about to start and I haven’t even started Old Man and the Sea yet!

Posted by 1001: A Film Odyssey is produced, directed and written by Chris, a librarian. at 8:02 AM