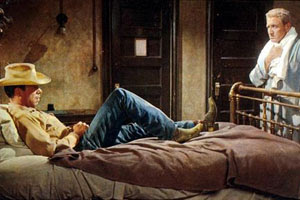 Bad Day at Black Rock is a very difficult film to pigeonhole. It looks like a Western. The few Black Rock residents we see are mostly dressed like cowboys. The chief power in the town is a man called Reno Smith, a Western name if I ever heard one. But its 1945, Not 1885! The town seems so slight that it reminded me of the fake town the townspeople built in Blazing Saddles to fool Slim Pickens. And Macready (played by Spencer Tracy) is wearing a suit, sort of like he jumped out of an episode of Mad Men. It also has a film noir flavor, with the mysterious town harboring a great secret But since it’s in glaring Technicolor it can’t be film noir! It’s also a talky film with a lot of action or is it an action film with a lot talk? The cast is top notch. Tracy as the one-armed hero, Robert Ryan and Ernest Borgnine as the heavies determined to do what is necessary to take care of Macready. Also look for character actor extraordinaire Walter Brennan as the good hearted doctor/mortician. Another example of the ying and yang of this movie. It can also be viewed as an existential theatrical piece (as someone else pointed out, it's sort of like Sartre’s No Exit). I mean twelve people live in this town and there’s only one girl! Overall, I like the fact that I can’t easily place this movie. It’s bugging me. But it’s well acted and well done. A good edition to the 1001 movie list.

Favorite pushed me too far moment: One armed Spencer Tracy has finally had enough of big bully Ernest Borgnine and uses martial arts on him to kick the crap out of him. As the doc Walter Brennan says afterwards, “Man, oh man.”

Second favorite pushed me too far moment: Aging doc Brennan smacks tough guy Lee Marvin across the face with a fire hose knocking him out cold.

This cast looks somewhat familiar to me: Lee Marvin, Ernest Borgnine and Robert Ryan will reunite twelve years later for The Dirty Dozen.

Speaking of Lee Marvin:
Lee is sort of teamed with Ernest Borgnine here as one of Reno Smith’s subordinate accomplices. But where Borgnine is a portly bully, Marvin (as Hector) seems to be the one more likely to take a life without thinking of it for a moment. He dresses like a cowboy and acts like a cowboy. The scene where he tries to twirl his six-shooter (poorly) would be more amusing if he wasn’t such an asshole. This ranks as much more sinister heavy than Lee plays in The Wild One and foreshadows his most dastardly villain in The Man Who Shot Liberty Valance.

(To the one-armed Macready) You look like you need a hand.

You all the time guessing ain’t you boy?

(First pretending to diagnose the problem with Doc’s Hearse and then violently ripping the wiring out.) Yeah, It was the wiring.


Tomorrow: Day Four of Lee Marvin week!
Posted by 1001: A Film Odyssey is produced, directed and written by Chris, a librarian. at 10:32 AM