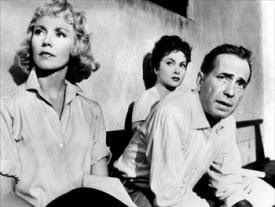 Trying to view all the films on the 1001 Movies You Must See Before You Die list can make you forgetful at times. I actually watched this film several months ago, but forgot to make a post. Well, better late than never.

But do I have anything to say about it?

I do know Beat the Devil is mentioned in the movie about Truman Capote, Infamous. In Infamous, Capote (played by Toby Jones) impresses the locals with stories of how he beat Humphrey Bogart in arm wrestling during his work on Beat the Devil. I’m not sure what my point is other than recommending Infamous.

But what about Beat the Devilitself? It’s a strange little caper movie to be sure. It had a low budget feel to it that made it seem unlike a John Huston film to me. Despite its oddness, I found the whole thing lightweight, but enjoyable. And a very interesting cast including Bogart, Peter Lorre, Robert Morley, Gina Lollobridgida and Jennifer Jones.

And Truman’s writing? Adopted from a novel, I thought the screenplay was very sharp and the quick retorts made Mr. Bogart and associates that much more fun to watch.

That's about it for this one.
Posted by 1001: A Film Odyssey is produced, directed and written by Chris, a librarian. at 7:30 AM