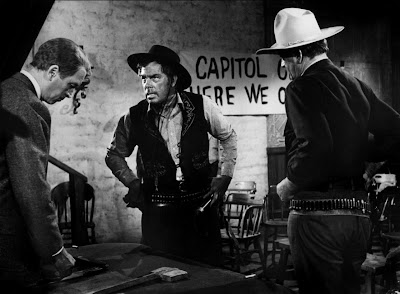 This is the West. When the legend becomes the fact, print the legend.

Education is the basis of law and order.

John Ford has certainly done his share of building the legend of the West in his films, so it’s interesting that he seems to want to show the man behind the curtain in his final great Western. (Hint: It’s not the Wizard of Oz behind the curtain, it’s actually John Wayne). This film reminds me a bit of Clint Eastwood’s Unforgiven as a Western myth buster. I’m just glad our civilization has evolved to destroying people’s lives with law books and red tape instead of six-shooters. Note: I’m not sure if I’m being sarcastic or not.

All that aside, I think the film holds up quite it holds well.

Jimmy Stewart is perfect in his role as a man who’d rather wave a law book than a gun (He’s really too old for his role, but I’m not complaining). John Wayne usually plays John Wayne and luckily his role of Tom Donavan calls for…John Wayne (Also too old, and I’m still not complaining) And I’d put the supporting cast of this film up against most any other: Andy Devine (as the wonderfully bumbling lawman), Edmond O’Brien, Lee Van Cleef, Strother Martin, Woody Strode, John Carradine, Denver Pyle and Vera Miles.

Seems like I’m forgetting someone. Oh, yeah. That would be Lee Marvin who plays Liberty Valance.

Liberty Valance is a psychopath. Just the name puts fear in the eyes of all who here it. He uses his whip on Jimmy Stewart during a holdup. (If you beat on Jimmy Stewart, you got to be a hell of a bad guy!) There is also a memorable scene when Lee and his gang destroy a newspaper office and nearly kill newspaperman Edmond O’Brien.

You could see why Marvin was cast as nasty villains because he’s so damn good at it! In fact, he’s so good in these type of roles that it’s somewhat surprising that he ever got cast in later lead roles. (Even his later good guys weren’t completely good.) Out of all the prominent cast members that I’ve mentioned above, Lee Marvin is the one you’ll probably most remember from this movie and certainly the one you’ll least like to see in your nightmares.

“Why don’t you get yourself a fresh steak on me.”

“You gotta choice dishwasher, either you get out of town or tonight you be out on that street alone…you be there…and don’t make us come and get you.”

“All right dude. This time, right between the eyes.”

“You got two hands hashslinger. Pick it up!”

Tomorrow: Day Five of Lee Marvin week!
Posted by 1001: A Film Odyssey is produced, directed and written by Chris, a librarian. at 9:54 AM