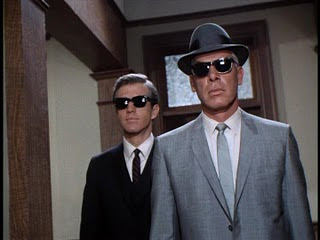 The hitmen in the 1946 version of The Killers have only bit parts. They knock off the main character at the beginning of the film and come back for a gun battle towards the end. In the updated and drastically altered 1964 version, the film is from the point of view of the killers, who eventually come after the man who put out the original hit. The cast includes John Cassavetes as the initial victim of the hitmen, Angie Dickinson and her beehive hairdo as the less than trustworthy romantic interest, future President Ronald Reagan in a rare role as a heavy, future Sheriff Lobo Claude Akins as Cassavetes’s loyal mechanic, and underrated tough guy hitman Clu Gulager, who I can’t help but refer to as Clugaler.

But on today’s blog it’s is all about Lee Marvin. Lee (with Clugaler) performs the hit on Cassavetes in the opening scene but can’t get over the fact that the victim seemed to not care that he was about to be knocked off. The killers eventually try to track down the one who put out the hit and extort money from him. Along the way, Lee lets Clugaler do much of his dirty work, like punching Akins in the stomach or turning up the steam of a sweatbox to unbearable levels on crook Norman Fell. While this is going on, Lee talks calmly to them, reasoning with them as if they really have any choice in the matter (Which they don’t!). Lee’s torturing highlight involves dangling Angie Dickinson out of an upper story window by her ankles.

THE FINALE SPOILER It turns out Angie and Ronnie are in cahoots the whole time. After Lee and Clugaler try to get some money out of him, Reagan shoots them both with a high-powered rifle (Damn NRA!). Reagan and Dickinson go to their house and pull some money out of their wall safe and plan to leave town. But do you really think Lee Marvin will go down so easily? Clugaler, maybe. But, Lee?

I don’t think so, Dutch!

Lee (bleeding severely from the future president’s bullet) follows the couple to their house where he catches them in their living room and SHOOTS Ronnie, then looks into the beautiful, sleepy eyes of Angie Dickinson and SHOOTS her too!
Then (the best part) Lee grabs the suitcase of money and stumbles to the front lawn. He sees a police car coming and shoots at it…with his finger. Then he collapses onto the lawn, money scattering everywhere and presumably dies as we see a great overhead shot of the scene before the end credits.

Lee Marvin, method actor: Some have attributed Lee’s realistic death scene to the fact that he was extremely intoxicated during the shooting of the scene and felt no pain on his final hard fall to the ground.

You see, the only man that's not afraid to die is the man that's dead already.

(To Angie Dickinson before he shoots her)Lady, I haven't got the time.

[In hushed tones] Sylvester, unless you want to renew your partnership with the late Johnny North, I suggest you tell us everything and anything we want to know. 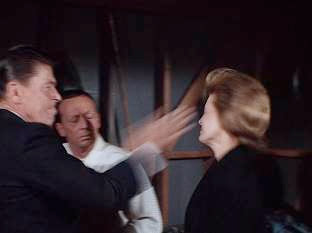 Posted by 1001: A Film Odyssey is produced, directed and written by Chris, a librarian. at 2:17 PM