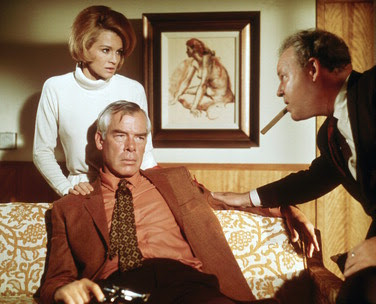 Did it happen? A dream?

The plot: A thief named Walker is betrayed by his partner Reese on a heist of a weekly money shipment out of Alcatraz. Reese shoots Walker, leaves him for dead and takes his wife. Walker survives (unless the whole thing is imagined, which is a distinct possibility) and takes his revenge on Reese and the mysterious corporation that Reese buys his way into with Walker’s share of the loot.

I must have liked this one because I watched it three times! (Or maybe I just didn’t understand all of it.) I don’t think there is a right or wrong answer to the questions Point Blank raises. I’ll say this; it improved with each viewing and is a worthwhile edition to the 1001 Movies You Must See Before You Die List.

But on today’s blog it’s is all about Lee Marvin and here are some Point Blank Leeisms..

1) He shoots the hell out of a mattress with such ferocity that I actually feel sorry for the mattress.

3) He beats the crap out of two guys backstage at a nightclub while go-go dancing and a screaming soul singer perform in the foreground. (God, I love the 60’s!)

4) He tosses a naked man out off the top floor of an office building. (Dean Wormer did have it coming!)

6) He shoots the hell out of a phone with such ferocity that I actually feel sorry for the phone.

7) He stands like a statue while Angie Dickinson beats the crap out of him. (Revenge for Lee hanging Angie out of a window by her ankles in The Killers.

Angie later hits Lee squarely over the head with a pool cue. (This is apparently a form of foreplay if I’m following the movie plot correctly.)

Lee also gets the best of Dean Wormer from Animal House, Archie Bunker from All in the Family, the guy from the To Serve Man episode of The Twilight Zone and Bat Guano (If that is his real name) from Dr. Strangelove. The only guy who seems to understand him is the sniper, that gung-ho cop from Hill Street Blues.

“We Blew It.” (He blew it two years before Peter Fonda did.)

There didn’t seem to be a lot of great quotes from Lee in this one if you just put it onto paper. Some of the memorable lines are said by others and we see Lee react to them. For example: His wife expresses her regrets in detail to her husband while he sits in an almost catatonic state with no reaction and no dialogue and mostly just stares blankly into space.

Keenan Wynn has my favorite line in the movie, “Take It Easy, You’ll Last Longer.” However, Lee can makes simple lines like, “Reese. I want Reese!” and “Don’t Get Lost,” more memorable than you might think.

A word about the remake of this movie- Payback with Mel Gibson. All I can say is, you put 1999 Mel Gibson against 1967 Lee Marvin…my money’s on Marvin.

Because you can’t have Lee Marvin week without The Dirty Dozen!
Posted by 1001: A Film Odyssey is produced, directed and written by Chris, a librarian. at 4:13 PM