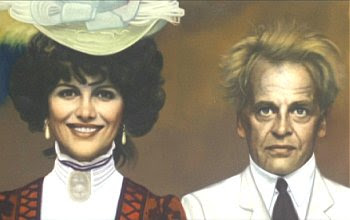 Much has been written about Werner Herzog’s epic Fitzcarraldo.
1. Irishman Fitzcarroldo loves opera in general and the music of Enrique Caruso in particular.
2. His great desire is to build an opera house in Peru
3. In order to finance his project he has to get a steamboat to a remote section of the Amazon to harvest the rubber trees.
4. In order to do that, he must somehow get the steamship over a mountain.

The moving of the steamboat over the mountain took months to shoot, and Herzog all the while had to put up with lead actor Klaus Kinski, who for lack of a better term, who by all descriptions was pretty much a lunatic. Viewing the scenes of the boat going up the mountain is excruciating for the viewer (in a good way), but is also at times exhilarating when accompanied by a little Caruso. It also brought back memories of my favorite childhood story, The Little Engine That Could. Definitely a good choice for the 1001 book, but I might recommend a little Dramamine before viewing.

Claudia Cardinale’s entrance in Fitzcarroldo
Keep in mind that all the other Cardinale movies I’ve blogged this week were when Claudia was in her twenties. Claudia is past forty in Fitzcarroldo, so I guess that doesn’t warrant a dramatic entrance like in The Leopard or Once Upon a Time in the West. However, the opening scene where Claudia (as Molly) and Klaus Kinski (as Fitzcarroldo, her husband).hurry off their boat to go to the opera house to get a glimpse of Caruso is still a nice opening scene.

DVD extra’s acknowledgement of Claudia’s place in the universe: From director Werner Herzog: “Look how beautiful she is…I think God on my knees that she was in this film!”

Claudia on a 1-10 scale for Fitzcarroldo: This is no longer the sixties sexpot. This is a mature woman in her forties. Claudia really is only in about half of the film, and looks quite stunning in a series of early twentieth century outfits. No, this isn’t the 60’s Claudia, but the 80’s Claudia is quite nice, thank you. Claudia’s still a 10!