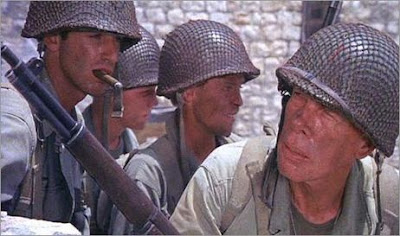 The Big Red One is the final film by eclectic director Samuel Fuller. This film is the autobiographical story of Fuller’s infantry regiment during World War II, where a fictional version of Fuller (played by future nerd vigilante Robert Carradine) and three other soldiers, including Corvette Summer star Mark Hamill, an Italian guy and the guy that looks a lot like Gary Busey, who all seem to fight everywhere during the years of World War II. Let’s see: France, Belgium, the beaches of Normandy during D-Day and Italy. I don’t think they made it to Japan, but I think I’m willing to cut them some slack. It’s not as mercilessly violent as something like Platoon or Saving Private Ryan, but it is pretty powerful at times.

But this blog isn’t supposed to be about Samuel Fuller, it’s all about Lee Marvin.

Like in The Dirty Dozen, Marvin is the leader of men going into battle. Except this time he is a sergeant, not a colonel. And instead of leading twelve criminals with no training, he’s leading four baby face soldiers (as well as their unlucky fill-ins). There’s even a Dirty Dozen reference when a soldier tells him where he is from and Lee responds with “Never heard of it,” a reprise of Donald Sutherland’s memorable line from The Dirty Dozen.

One of the film’s highlights is Lee delivering a baby in a tank He also has to be a psychologist at times, such as Mark Hamill about to go over the edge and Lee gently telling him “I think you got him,” after Mark keeps shooting an enemy after he’s already killed him.

Lee’s also got to be a gambler and an actor. The Germans have lulled his men into a trap and he has to artfully make the Krauts think he is going for reinforcements so they won’t all be slaughtered. But the scene I will remember from this film is his carrying a dying child on his shoulders. The child dies (according to the narration) and he, the sergeant feels such grief that he is unable to put the child down for half and hour.

“You don’t murder animals. You kill them!”

“It’s just one of your balls, Smitty. You can live without it. That’s why they gave you two.”

This is the final film entry with Lee Marvin in the 1001 movie book.

Sorry I didn’t have the time for Cat Ballou, Donavan’s Reef, Emperor of the North Pole, Ship of Fools and that one he made with Chuck Norris, whatever that was called. Maybe next time.

Posted by 1001: A Film Odyssey is produced, directed and written by Chris, a librarian. at 4:07 PM