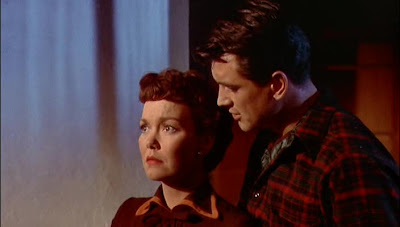 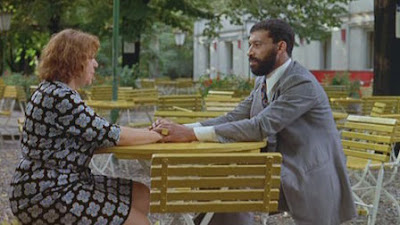 The 1001 blogger has a pencil dangling from his mouth as he thumbs through two movie books. He starts to edit some notes on the computer in front of him as the frozen image of Julianne Moore stares at him from his Magnavox to his right. He is so focused on what he is doing that he doesn’t hear his wife approach him.

Blogger’s Wife: So, what is it you’re doing now?

1001 Blogger: Oh, I didn’t see you there. I was working on this comparison for my blog. Do you want me to tell you about it?

The Blogger’s wife is unresponsive as he continues.

1001 Blogger: You see the Douglas Sirk films from the 50’s like All That Heaven Allows have apparently been very influential. I always thought that they were just fluff pieces. Guess I'm learning a few things. Continuing education is the key. We can learn through our movies.

Blogger’s Wife: Yes, dear. That’s all well and good, but you’ve been watching these movies for a long time now. Don’t you think you need to take a break from your 101 movies and go cut the grass?

1001 Blogger: (Laughing) First of all, it’s 1001 Movies You Must See Before You Die. Oh, you knew the title, didn't you? You were just having sport with me. Anyway, the grass can wait another day because I’ve discovered a link between these films. (Raising his voice and pointing skyward) Triangulation! Triangulation, I say! You see, All That Heaven Allows, the Sirk film influenced both Far From Heaven, the Todd Hanes film and Ali: Fear Eats the Soul, the Fassbinder film. I would have never guessed that Sirk would have influenced Fassbinder!

Bloggers’ Wife: Fats Bender, sounds like a jazz musician. Anyway, as I said that’s all well and good, but I think you need to take a break and decide what kind of new televison we want. Not that I get a chance to look at it much these days, cause there’s usually a sixty-year old French movie playing on it. But I need some help with picking out some of these things. You know for our house!

1001 blogger: (Not seeming to notice her) What? Oh, my theory. Don’t you get it? Three films. Triangulation! Fassbinder took Sirk’s rather mundane dilemma of a woman who was a few years older than her lover and made a woman a lot older than her lover. He also threw in the outsider and racial component. She was German and he was a Moroccon emigrant…or was he a Malinese? I can’t remember, but it’s the same effect. It doesn’t effect the triangulation concept. And then we have the Haynes film, which has the racial relationship component and throws in the homosexual element! Don’t you see? Triangulation! In the original Sirk film, Rock Hudson certainly couldn’t have been gay.

1001 Blogger: No. Rock Hudson, the screen component was not at all gay. What he did in his private lie is outside the realm of this evaluation.

Blogger’s Wife: You’re spending to much time on this! We have lives to lead, you know!

1001 Blogger: (Ignoring her comment) Oh, and I haven’t even mentioned the triangulatory link between the three films and televison. Jane Wyman’s jerkwad children give her a television to compensate for the loss of her boyfriend in All That Heaven Allows. In Far From Heaven, Dennis Quaid is a bigshot in a company that manufactures televisions. In Fassbinder’s film, one of the sons of the lady dating the younger man kicks in her television screen when he first hears about the relationship. I’m trying to interpret this link now. Or if there even is a link or if it’s just a coincidental motif…What was I saying?

Blogger’s Wife: Would you listen to yourself! I’m sick of all this! You care more about what you put on that damn TV than you do about me!

The 1001 blogger leans back in his chair and begins to stroke the top of the television as if it were the family pet.

1001 blogger: Well, I didn’t know you felt so strongly about this. Let me ask you this. Have you ever considered seeking psychiatric help? You seem really irrational.

The blogger’s wife turns beet red and goes over to the blogger’s television and kicks in the screen. She pulls her leg out of the shards of glass and straightens herself up before silently leaving the room.

1001 blogger: (staring blankly at the guts of his television) Triangulation! 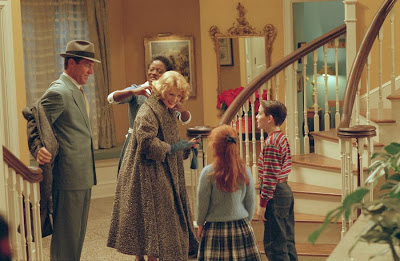 Posted by 1001: A Film Odyssey is produced, directed and written by Chris, a librarian. at 8:20 AM