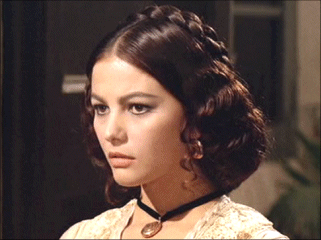 This week’s blogs are all about the Tunisian actress Claudia Cardinale. Ms. Cardinale is best know for her work in Italian films such as The Leopard and 8½ as well as American Films, such as The Pink Panther and Circus World.

Now why would I choose a week of films for Claudia, beautiful as she obviously is, over her more famous counterpart Sophia Loren? Well, when I looked over the 1001 Movie You Must See Before You Die Book, I found four films listed with Ms. Cardinale in prominent roles. Fellini’s 8 ½,Viscontti’s The Leopard, Leone’s Once Upon a Time in the West and Herzog’s Fitzacarldo. A pretty impressive lot. When I tried to find any listing of Loren films, I came up empty (Though I’m a little surprised her Oscar winning role in Two Women isn’t included.) So Ms. Cardinale it is.

The Leopard, made by filmmaker Lucino Visconti is based on the popular Italian novel by Giuseppe Lampedusa, and is set during the time of Risorgimento and the unification of Italy in 1860 to 1862. It is a time of turmoil, war and a changing of the guard. Much of the personal story of the film involves the aristocratic Prince Fabrizio played by Burt Lancaster, his beloved nephew Tancredi and his love interest Angelica.

This is the kind of film that some love for its lushness, grandeur and epic storytelling. Others might just be bored with the whole thing and find it moves too slow and is just too long.

The film was made in three languages and dubbed where appropriate. The Italian version, which is over three hours in length, is generally acknowledged as the definitive version. Of course, it’s a little disconcerting at first to see an Italian voice coming out of Burt Lancaster that sounds nothing like Burt Lancaster. The American version is English dubbed, with Lancaster providing his own voice. There is also a French version, perhaps to accommodate French co-star Alain Delon. The Criterion DVD set I watched included the American and Italian version. I watched a bit of both. The only problem I had with the Italian version was getting used to the bombastic Italian voice coming out of Burt, but once I got used to it, I began to like the Italian version.

Claudia Cardinale in The Leopard

Claudia’s entrance in The Leopard: One of the best of Claudia’s entrances, which doesn’t even occur until about an hour into the film. She plays Angelica, the daughter of the rather buffoonish, upwardly mobile Don Calogero who has just entered the Prince’s palace for the first time. There is much clamoring going on as this scene unfolds. Nephew Tancredi is talking to Concetta, his potential future wife. Don Calogero introduces his daughter Angelica, who enters the room. Everyone’s jaw drops. Everyone stares. Concetta looks horrified. Angelica tucks in her lower lip and Tancredi looks into her brown eyes and it’s all over for him. Concetta knows in an instant she’s lost Tancredi forever. Prince Fabrizio’s wife then tells Angelica that “You’ve changed a lot and not for the worse,” which seems to be a bit of an understatement if you asked me.

Just saying: Unlike the Italian voice dubbed for Lancaster, I couldn’t get used to the English voice actress who dubbed Claudia.

One Kiss: There is a scene in The Leopard where Claudia gives a gentle kiss to Burt Lancaster that is sweet and respectful. It was a definite contrast to the kiss between the two in The Professionals where Claudia is just trying to seduce him to aide her in escaping.

Films acknowledgement of Claudia’s place in the universe: “How fortunate we are, Miss Angelica, to gather so lovely a flower into our home.”-Burt Lancaster as Prince Fabrizio.

DVD extra’s acknowledgement of Claudia’s place in the universe: Even the usually straight-laced film commentator Peter Cowie can’t help but gush a little recalling his meeting Claudia at a 2003 Berlin film festival-“I think she looked just as sensual, just as naughty, just as she did in the far off 60’s.”

Claudia on a 1-10 scale for The Leopard-If you take a look a Claudia in the ballroom finale, she is donning a most flattering hair bob with ringlets in the back accentuated nicely by an elegant white dress, pearls, and is even wearing a tiara. I want to use a word other than elegant to describe her, but nothing else seems to fit. Her touching dance with Burt Lancaster adds even more to her allure.
Claudia rating for The Leopard: She’s a 10!

Next up: The Pink Panther
Posted by 1001: A Film Odyssey is produced, directed and written by Chris, a librarian. at 9:53 AM