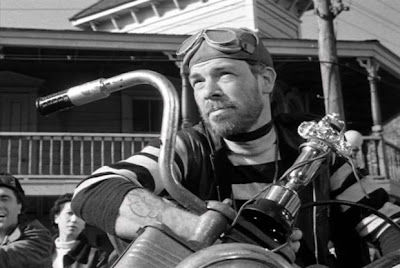 Picture Marlon Brando (as Johnny) rolling down the street in a leather motorcycle jacket. He’s the leader of a motorcycle gang who drives into a town and creates havoc-maybe not exactly havoc, but this guys are kind of disruptive and definitely annoying. His “tough guy” gang includes the future Jerry the dentist from The Dick Van Dyke Show and the future Mr. Kimball from Green Acres, not exactly ideal tough guys, but I’m willing to suspend disbelief on this one. Johnny and the gang deal with the town cop’s pretty daughter (“I don’t make no deal with cops,” Johnny says after discovering who her father is), locals who want to take justice into their own hand and a rival motorcycle gang.

It’s been awhile since I’ve seen this movie and figured it would be pretty dated.
Here’s some of Brando’s dialogue after the cop’s daughter asks him if his gang goes on picnics.

Johnny: Picnics? Man you are too square!
I have to straighten you out.
You don’t go one special place. That’s cornball style.
You just go. (Snaps fingers)
A bunch gets together after all week. It builds up.
The idea is to have a ball!
If you’re gonna stay cool, you gotta wail.
You gotta put something down. (Snaps fingers)
You gotta make some jive!
Don’t you know what I’m talking about?

A little antiquated, but I can still dig it.

Of course the most famous quote of the movie is his response to the question of what he is rebelling against.

Johnny: What have you got?

Should it be in the 1001 movie book? It’s a true relic of the era and certainly an interesting role for Brando. Yeah, put it in the damn book, it seemed a little better than I remembered it. One personal problem though: The older I get the less I sympathize with these rebels. What exactly do they want? (As a character in the film asks) Why can’t they just behave themselves and act like decent citizens…My God, I’m about to grab a shotgun and start yelling at kids to get off my lawn at any moment!

One hit wonder: I was curious about Mary Murphy, who played the nice girl who at least to a degree tames Johnny. I found out that she died in 2011 year at the age of eighty. The Wild One was by far her biggest and only important film role. So it goes.

But what about Lee Marvin?

Marvin plays Chino, the leader of the rival motorcycle gang and seems to have a lot of fun with this role. He rides into town and immediately tries to pick a fight with Johnny.

He’s wearing a black and white striped shirt, cap and riding goggles and has a stogie sticking out of his mouth at all times. Did I mention he’s having fun? Even hamming it up a little. Pick a fight with Johnny? Doesn’t faze him. Cops pick him up to go to jail. Doesn’t faze him. He seems to be perfectly fine with everything-just waiting for that moment when he has the opportunity to vandalize something. This is easily the most lighthearted of the heavies he played on this list. Well, if Lee’s having a ball who am I to criticize? Storm the Bastille!

(Sarcastically) What are you doing in this miserable gully Johnny, my love?

(Even more sarcastically) Let’s go inside and have a beer and I’ll beat the living Christmas out of you.

(With the greatest amount of sarcasm that Lee Marvin can muster) Now ladies and gentlemen…this lovely young lady over here…shall hold this beautiful object signifying absolutely nothing…Watch closely… See how the timid maiden of the hill clutches the gold to her breast. . and see how she fights back a tear as her hero lies bleeds to death in the street..

Tomorrow: Day Three of Lee Marvin week!
Posted by 1001: A Film Odyssey is produced, directed and written by Chris, a librarian. at 10:29 AM