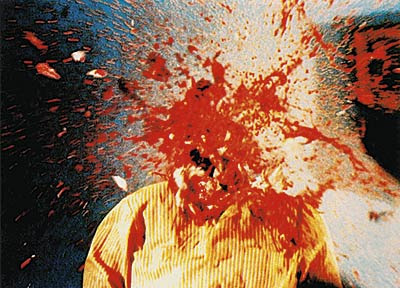 Zombies are hot. No, I’m not talking about some bizarre fetish attraction I may have for the female undead. I mean zombies are a hot commodity. I see at the library more zombie novels and anthologies of zombie short stories than I would think the genre would allow. We also have films like Zombieland, Planet Terror and Shaun of the Dead. One zombie movie, I can’t remember which one, had a blurb on its DVD cover that exclaimed. “One of the top 25 zombie movies of all-time!” Since I can’t come close to naming 25 zombie movies, I’ll just have to take their word for it.

Let me see if I have the zombie rules straight, at least in the George Romero universe.

Zombies move about really slowly.
They can easily be knocked down.
They can be killed with a bullet to the head.
They don’t really seem to be that strong.
They aren’t interested in each other, just living flesh.
If they get their teeth in you, you will soon be one of them.
They tend to gravitate to areas where they would have gone while they were alive, but don’t really know why.

This last point seems to be the main premise behind Dawn of the Dead, the sequel to Romero’s original Night of the Living Dead. Hundreds and hundreds of zombies have converged at the local shopping mall as our four main heroes try to fend them off as the undead aimlessly wander through the place that gave their life the most meaning when they were alive.

The film does make the point, and it is pretty funny, how mall shoppers tend to go on their shopping excursions by rote. Either that or Romero just had a friend who could get his cameras into an empty shopping mall because it would be really cool to shoot a film there.

The movie looks a little on the cheap (which can actually be an advantage in the horror genre: See The Evil Dead) but unlike its predecessor, it’s in living color! There’s also plenty of blood, guts, decapitations and exploding heads to keep one from nodding off during the proceedings.

SCTV memory: SCTV had an ongoing skit called The Farm Film Report with Joe Flaherty and John Candy as yokel movie reviewers who only seemed to like films that featured an exploding head scene in it. Whenever they showed a movie clip that ended with someone’s head exploding, they would cheer and shout out “Blowed ‘em, blowed ‘em up real good.” I don’t recall precisely, but I’m sure Dawn of the Dead must have been one of their favorites.

Day after effect: The day after I watched Dawn of the Dead, my ankle became swollen and my gait started to make me appear I was doing the "zombie shuffle" when I tried to walk. Probably just a coincidence.

Tomorrow: I'm going to head to the 80's to see a film I haven't seen in at least twenty-five years.
Posted by 1001: A Film Odyssey is produced, directed and written by Chris, a librarian. at 7:58 AM